Botanically seen walnuts are no nuts, but stone fruit. The name comes from the old German word „Walah“ = Welsch (= foreign / Romanic)- The walnut is also called Persian or English walnut. The Welsch nut originates from Persia or the western part of the Himalaya mountains.
Juglans = Jovis glans = Jupiter´s acorn proves the importance in ancient Rome. Under „Alexander the great“ the walnuts came to Greece and into the Mediterranean countries.
Grafted varieties from Italy reached North West Europe at the end of the Latin Empire. Later the walnut was imported by North America, the countries of the Andes in South America as well as by South Africa, Japan and Australia. 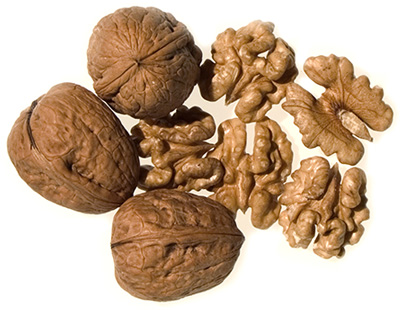 The total world production is more than 600.000 tons on account of scattered plantations and twice as big as the commercial production. Only half of this quantity is used by the trade. Main producing country is nowadays California with 220.000 tons annually, followed by China with 180.000 tons and Turkey with 70.000 tons. The nut tree grows without any problems in Central Europe, but only in the south of France it is commercially cultivated. France produces annually 35.000 tons, from which 1/3 is exported. 40% come from the vicinity of Grenoble (Départements Isère and Drome), since 1937 the so called „Grenobler nut“. The remaining 60% come from Périgord, the départments Dordogne, Lot and Corrèze. Up to 65% of the variety „Franquette“ with its longish, elliptical form, is cultivated. France´s average yield of 3 − 3,5 tons per hectare is rather small, but of very high quality.

Other plantations are in Italy with annual 20.000 tons, in India with 15.000 tons and in Chile with 5.000 tons, from which the main portion is sold in South America, Hungary and Moldova. The products from the Balkans vary and are of no importance for the export.

The walnut can be used in many different ways. In USA more than half of the kernels is used for baking and oil production while Germany mainly imports the nuts in shells. Walnut oil is obtained by cold pressing of ground kernels. It is used in the soap industry, for oil painting, as components for ointments. Green, unripe nuts are used for the production of liqueur and nut wine. On account of the high fat content the walnuts have a remarkable nutritive value and are used in the medecine as blood cleaner and for strengthening. They also influence positively the growth of children, are good for the eyes and nerves, help against skin diseases (eczema, acne), constipation, impotence, activate the lymph fluids, reduce a higher cholesterol level, the risks for heart attacks and swollen limbs.

The wood of the walnut tree is much liked by the furniture industry (veneer) on account of its hard and fine wood grain.

Walnutkernels are used by the baking- and confectionary industry. Walnuts in shell are a typical Christmas article. Oil and nut wine are produced from walnutkernels.

The walnut tree does not have any specific needs from the soil, it exists worldwide in all temperate zones. It prefers deep, loamy, rich in humus and nearly pH-neutral soils with good drainage of the lower layers. The winters should be cold (but max. −10° C.), so that the tree buds very well in spring. Hot summers with annual rainfall of 800 − 900 mm are ideal. The walnut tree reaches a height of up to 20 m. After 5 − 8 years the tree has its first crop, with 15 years it reaches full bearing capacity (50 − 100 kg), after 50 years it has the biggest yield which ends at 80 years. A walnut tree can reach an age of 150 years. The leaves have a central stem with mainly 5 or more longish pairs of leaves at the side and one at the top.

The tree has male (aments) and female blossoms developing spiked like structures. When the nut is ripe, it has a green fibered outer shell of 4 − 5 cm in diameter, a very hard, light brown, two piece inner shell with the eatable,very wrinkled kernel inside. The kernel is protected against oxidation by a thin, brown skin as air can penetrate at the typical seam of the outer shell. Each nut with inner shell weighs 10 − 13 g, but only half of it is eatable. The kernel has a tartly nutty, slightly bitter taste.

Groups of 2 − 3 nuts of the traditional varieties grow at the end of the saplings from the previous year. There are also varieties, e.g. in Spain and in other Mediterranean countries, where the nuts appear sideways along the branches.
During the colonial era these so called Spanish varieties were imported in South and Central America.
In California in the 19th century these varities were improved. They already bear the first nuts 4 − 5 years after planting, reach commercial maturity already after 9 − 10 years and a yield of 6 − 7 tons per hectare. The convential kind only has half the yield.

A number of 80 − 150 conventional trees are planted per hectare, of the smaller, newer varieties 300 − 400 trees.
Towards April the male blossoms drop off their pollen and by means of wind the female blossoms are pollinated. As the female blossoms only appear at the beginning of May, later varieties are grown in all plantations, in order to make the best use of the female blossoms. After pollination the female blossom develops a fruit, which has its full size in July, and after lignification of the shell harvest can be October. Sunny weather and calcium fertilizer is important for good growth.

Abt. 10% of the walnuts are harvested before they are fully ripe. Especially in France, Italy and Belgium these still very soft kernels with a bitter tasting skin are a speciality. The harvest of the fresh, not quite ripe walnuts begins mostly during the second half of the September.

In earlier times the nuts were beaten with long sticks from the branches, nowadays the trees are shaken by machinery and the nuts are manually collected. The green outer shell is taken off mechanically to prepare the nuts for sale. The shells are scoured by adding little water in a vertically rotating cylinder with inner abrasive walls. The remainder − abt. 90 % of the walnuts − is dried and sold. Half in shell and half as kernels, which are used for baking and snacks. The to be dried nuts, must be fully ripe and therefore are only harvested at the beginning of October. Depending on the variety the outer shell breaks open more or less irregularly, so that the nut drops out by itself. Sometimes a shaking machine must still help. Between the trees the grass is mown very low to facilitate the collection of the nuts. The smaller plantations still pick up the nuts by hand.

The walnuts are washed and dried in different kind of locations. Into the silos, where the nuts are stored, warm air of 25 − 35 ° C is blown. The temperature must not be too high, so that the kernels do not turn too dark. A light coloured kernel is a sign for first quality. The drying lasts 3 − 5 days until a humidity level of 12% is obtained. The kernels lose nearly half of the weight during this drying process.

Then the shells are cracked to get the kernels. Nowadays this is still mainly manually done with a hammer. California has machines for this procedure, but they are seldom used as they are the cause that many kernels break and pieces of shells remain.
After cracking the kernels are graded and assorted to colour. In California by computerized video equipment, in Europe manually.

There is a difference between the grading of walnuts in shell and walnutkernels.

Walnuts are graded by different sized sifts. The grades begin with 22 mm and go up to 32 mm and bigger (specification: 32 mm+).

Walnutkernels are assorted in respect of the condition of the kernel and its colour. Both results together classify the grade. At the start of the chart are the light coloured whole half kernels and at its end the dark broken kernels.

Exception are the industrial broken kernels which are chopped exactly to the size (in mm) required.