The gourmet, Lucius Vittilius, brought the first pistachios from the Middle East to Rome during the reign of emperor Tiberius (14-37 AD). It was quickly noticed that these also grow very well in favourable locations of Italy. Already several thousand years earlier the very tasty pistachios were already known in Indonesia, Persia, Mesopotamia, at the eastern shores of the Mediterranean sea and in North East Africa. 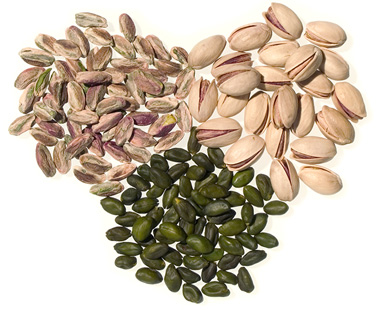 In northern Europe the pistachios only became known after the cultivation was started in the Arabic ruled Sicily. First trials were made with pistachios in USA at the start of the last century, but until its forties the nuts were mainly imported from Iran and Turkey.
Main suppliers for the European market are nowadays Iran and California. Smaller quantities come from Italy and Turkey.
Pistachios in shell, roasted and salted, are very much liked as a snack. The kernels with/without skin are mainly used by the bakery- and confectionary industry. The green skinned pistachio kernels are needed for the meat- and ice-cream production and more often also by the gastronomy.

Pistachio trees grow best in desert like climates - with hot days and cool nights. Most suitable is a height of 150 − 250 m above sea level. The trees are very tolerant towards alkali and salt. The wild growing pistachio tree has only very small pistachios. Only by the so called grafting its nuts get bigger and the number increases very much. In agriculture the grafting method has been known for centuries. It means artifical implantation of a twig of another variety into the tree.This method is also much used in the local fruit orchards.
Pistachio trees are dioecious meaning there are female and male trees. As pollen supplier one male tree is planted for 90 − 95 female trees. For pollination the wind is needed. Pistachios blossoms are not fragrant and do not develop any blossom leaves.
Therefore they are not frequented by bees or other insects. The pollination starts regularly mid March and is finished at the beginning of April. During the next for weeks it is very important for the development of the pistachios that the temperature does not drop below 0° C. frost, which can still occur in the growing areas until middle of May, destroys the young fruit and can devastate total crops.

Pistachios need 2 years to develop. For unknown reason the pistachio tree has one year a small crop and during the subsequent year a very big one. The difference of a plantation’s yield can be 15 times more in one year compared with the previous crop. Independently in which year the trees were planted, they adapt themselves strangely to the crop’s cycle of their cultivation area. In Iran normally the crop of the odd numbered years is bigger than the one of the even years.
Pistachios grow in grapes of 10 − 20 nuts, in length 20 − 30 mm , fitting tightly to each other. Under the 2 − 3 mm thick fruit flesh is a thin ivory coloured woody shell which is still fairly soft. It hardens when getting in contact with air. Under the woody shell is the yellow / green kernel covered by a violet skin.
The world´s biggest growing areas of pistachios are in Iran, around the cities of Kerman and Rafsanjan. The second largest are in the Joaquin valley of South California. As the pistachios are very much in demand worldwide, all plantations also in all other parts of the world are constantly enlarged.
The trees are planted 3 − 5 m apart so that they can be reached from every side without restriction by other trees‘ branches. First commercial yields are after 7 years. In comparison to the past when the plantations were flooded by water every few weeks, nowadays the trees are connected to a system of micro-sprinklers. As the pistachios are grown in desert regions, in USA and also in Iran where the water supply is scarce. The micro-sprinklers take care that a sufficient amount of water gets to where it is needed.

In the meantime harvesting is already mostly industrialised. At the end of September the ripe fruit is taken off the trees within a very short time and then immediately processed.
The nuts can be harvested manually or mechanically. The advantage of manual picking is that each single nut can be examined and appraised. Unsound and infested nuts are recognised and sorted out. The advantage of the mechanical harvest is the speed.
Mechanical harvesting is effected by a machine surrounding the tree with a big cloth and then shaking the trunk. The pistachios fall into the cloth and then are shifted into a machine´s receptable. The contamination by Aflatoxine is the biggest problem for the pistachios.
Aflatoxin is a metabolic product of the mould fungus which develops in connection with dirt and moisture over a certain period. On account of this fact it is absolutely important that the pistachios do not get in contact with the soil during the harvest and that long interim storage is avoided.
Once harvest is underway the pistachios are taken off the trees around the clock and immediately processed to minimize the risk of Aflatoxine.

After harvesting at first the fruit flesh is removed from the pistachios. This is mechanically done by passing the pistachios through 2 closely fitting rubber cylinders squashing them out of the fruit flesh. After the fruit flesh is separated from the pistachios, the next processing step became very important recently. The pistachios are placed into water for assorting into so called „floaters” and „sinkers”. Badly developed pistachios swim on top of the water and are called „floaters„. In Iran many years ago it was already ascertained that by eliminating the floaters the Aflatoxine’s risk is considerably reduced. Only the „sinkers” are further processed. After first drying by hot air they are moved into a silo where the final drying is done.
In earlier times the pistachios were dried on the ground in the sun, which boosted the contamination by Aflatoxine and discoloration of the shells.

The next processing step is the separation of closed nuts from the open. Most pistachios open their shells by themselves, only 10 % remain closed.
For assortment of the closed, all pistachios pass through a turning pipe covered allover with upright standing needles. All open pistachios are pricked up by these needles and lifted by the turning pipe to the top to a cloth or conveyor belt for additional processing. The closed nuts are not picked up and slide slowly to the end of the pipe.
The grading of the open pistachios is the same as for all other nuts. The pistachios are transported over shaking sifts with series of differently sized holes. First the little pistachios drop through the small holes and finally the big nuts through the big ones of the sift.
As the danger of aflatoxin concerning the closed sinkers is small, they are also going into further processing. Each single closed pistachio is opened manually by a hammer resulting in a fine crack of the shell. The so treated pistachios are then placed into water. The water penetrates through the fine crack, the pistachios swell up and the shell opens properly. After that the mechanically opened pistachios are dried immediately as described above.

USA effects the grading not only according to size but also in respect of quality:

The quality is based on following facts:

The green pistachio kernels must be mentioned in particular. The riper a pistachio becomes, the bigger the kernel will be, the colour changes from dark green to a light green/yellow.
The meat, ice-cream, confectionary industry and the gastronomy are also interested in the green pistachio kernels used as eye-catchers for their products. Apart from Turkey and Sicily, Iran specilised in the production of pistachio kernels. USA partically did not supply any green kernels so far because of the high costs for the assortment needing a lot of manual labour.

In order to obtain very green kernels, the pistachios are picked unripe − approx. a month before the normal harvest. The pistachio kernel is very green and a little bit smaller, so that the shell does not open by itself.
After harvest the the shell must be mechanically cracked by a mill. Kernels with the violet skin coming out of the shells, are swayed in hot water, so that the violet skin becomes loose. It is only loosened, but not yet taken off. The elimination of the skin is by means of vibration and suction. The pistachios run over vibrating steel slabs so that the loose skin comes off. As the skin is lighter than the kernels it can be sucked away.
Another step of processing is the assortment by a laser scanner to get light and darker green coloured kernels which are afterwards manually divided into 5 different colour categories. In addition the percentage of broken kernels is a quality’s factor. The fewer broken kernels are in the merchandise, the higher the value.