Nearly all agricultural products, which are nowadays grown in Australia, were imported from other continents. This does not apply to the Macadamia nut originating from the rainforests in Queenland and New South Wales – the east of the continent.

The botanist, Allan Cunningham, was the discoverer. The natural scientist, Ferdinand von Müller, working in Queensland, gave a detailed description of the Macadamia tree and its fruit in 1857.
He called the plant Macadamia intergrifolia after his friend, John McAdam. This important, physician, philosopher and politician moved to Melbourne in 1855 and became president of the Philosophical Society of Victoria.
Really known became the Macadamia nut only after it was imported by Hawaii in 1881. Commercial quantities came on the American market during the thirties of last century, thanks to the introduction of special tax concessions granted to the Macadamia farmers. Since then America is still remaining the biggest consumer of Macadamias.
Hawaii had near Hilo before the second world war an area of 1.000 hectares growing Macadamias. A much improved variety became available in 1948 and lead to a big expansion of the American plantations. These produce nowadays annually abt. 20.000 tons Macadamia–kernels. On account of Hawaii’s rising land prices, this expansion was stopped for the time being as the farmers can now sell their land as building sites, so that Hawaii’s crop is even slightly declining. 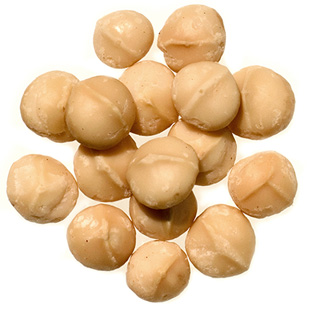 In Australia since 1918 trials were made to grow Macadamias. Profitable plantations exist only from early 1970. These plantations increase enormously reaching today from the Asherton tablelands in the north of Queensland down to the mid coast of New South Wales. In 1994 the Australian Macadamia crop, coming from 2 million trees on 20.000 hectares, was for the first time bigger than the one from Hawaii. Only half of the trees were at full bearing capacity. Until the start of the 21st century the Australian production should have increased to annually 30.000 tons.

In Kenia the Macadamia trees are also serving as sun protection for the coffee plants. In South Africa, Malawi as well as in Brasil, Florida, California and in China a few small producers are remaining who together supply some hundred tons. Only in Costa Rica the Macadamia production is increasing very rapidly. Macadamia kernels are mainly eaten as a snack, in raw condition they are very crunchy, but only by roasting the fine aroma develops.

Macadamias are also used by the bakery–, confectionery– and ice cream industry. In Asiatic dishes they are used the same as almonds.
Broken Macadamia kernels are covered by chocolate, preferably small pieces for the production of cheap chocolate.
Assorted nut pieces and grit are processed to high value edible oil by cold pressing, some of it goes into exclusive cosmetic products, like toilet soap, face and body lotions.

In the rain forests of East Australia there are 5 varities of Macadamias. In Queensland´s south east one finds mainly ‚Macadamia integrifolia‘, and in the north of New South Wales "Macadamia tetraphylla".
"Macadamia integrifolia" is only grown commercially, which can be recognised by the shell.‘s smooth surface. The nuts have a very high fat content on an average 75 % and are easily to roast.
The evergreen Macadamia tree grows slowly, but finally will be 12 − 18 m height.

The tree can reach an age of 50 years. Only after 6 years the first ball shaped stone fruit will develop. Its dark green leaves are oblong, leathery and shiny. The trees are accustomed to periodically occuring dry conditions. Macadamias need annually a minimum of 1000 mm rain, an average temperature of 25° C is the best. On 1-2 year old branches appear throughout the year 30 cm long clusters with hundreds of white to pink coloured, sweet smelling blossoms. Only 15 of these are pollinated - mainly by the wind. Meanwhile it was ascertained that pollination by bees leads to a higher yield.

By trimming the branches and by irrigation’s control it it is possible that all nuts of a plantation can be harvested at the same time. On Hawaii between September and December and in Australia from March to June.
The pollinated blossoms develop into grape like fruit clusters within 6 months. The single fruit consists of a green brown outer fiber shell, 25 – 30 mm in diameter, with a noticeable wart at the end – the same as on a lemon. It encloses a light brown, ball shaped, very hard stone shell containing the butter coloured kernel. The edible portion is slightly oval, has a diameter of 10 – 18 mm, with a breaking line in the middle where it splits easily.
Under good conditions each tree has a yield of 20 − 40 kg Macadamia nuts. The kernel´s share is only 25 − 30 % of the gross weight. On Hawaii during 1950 plantations with genuine Macadamia varities were established and at that time it was noticed that Macadamia´s blossoms need cross-pollination − only by it high yields of big nuts are possible. Since then endeavours are made to grow different varities on each plantation. This ensures an abt. 30 − 190 % bigger yield in comparison to monocultures.

On Hawaii during 1950 plantations with genuine Macadamia varities were established and at that time it was noticed that Macadamia’s blossoms need cross-pollination – only by it high yields of big nuts are possible. Since then endeavours are made to grow different varities on each plantation. This ensures an abt. 30 – 190 % bigger yield in comparison to monocultures.

It was also possible to develop several good compatible suppliers of pollen of high yield, meaning they can pollinate each other. The best cross-pollination can be obtained when each 3rd row ,8 − 10 m apart, grows a different variety. The trees are planted at a distance of 4 − 5 m.

When the Macadamia nuts are ripe, they drop to the ground by themselves, which was mown beforehand and cleaned from foliage. The nuts are collected by special machines into heaps between the rows of trees – the machines either equipped with a fan or with rakes. A second machine places the nuts – after branches and leaves were elminated – over a conveyor belt into an accompagnying receptacle.
There are two methods for the harvest. Either one waits until all nuts dropped off or the plantation is raked each time when sufficient nuts are on the ground. The last method seems to be more hygienic. It is mainly practiced by small plantations which still collect the nuts by hand.

The fibrous outer shell is eliminated in a kind of „tumbler“ in which it is first split and then drops off. The ball shaped nuts are delivered in shell to the processors. In comparison the consumers mainly see the nuts without shells. The cracking of the shells is rather tedious. It is impossible to use a normal nutcracker. Therefore most of the times a machine is used.
For preparing the cracking, the shells are washed and then sprayed with chlorine water to kill all microorganism on the surface of the shells. Later on the nuts must be dried so that the kernels only have a moisture content of 1,5 %, so that the eatable portion will separate easily from the shell. For this the nuts are filled into silos through which warm air is blown, gradually increasing to a max. of 64° C.

The dried nuts are assorted into 4 different sizes in a drum having corresponding holes. After that the shells are broken when passing between accurately placed stationary knifes of 2 rotating cylinders with exactly adjusted clearance. Then the shells are separated by air, each kernel passes an optically controlled machine (a so called laser scanner) which eliminates all dark impurities in two steps. e.g. remaining fragments of shell. (Final yield of whole Macadamia kernels is only 30 %).

Finally an assortment by sifting into 3 sizes and elimination of broken kernels is effected. After passing the visual control and metal detector, the kernels are vacuum packed into polythene or laminated bags.

Some of the nuts are roasted before packing for half an hour − either dry or in oil at 130 – 135° C, sorted again according to size and then salted slightly. The Macadamias should always be stored airtight, as they are very dry and absorb moisture resulting in the loss of crispness. An addtional problem is the high fat content of the Macadamia turning them quickly rancid. Deep frozen in original packing the Macadamia will keep well for years without noticeable loss of quality.

The smooth, beige coloured kernels have the highest fat content (abt. 76 %) compared with other nuts. The fat is a combination of 16 % saturated, 83 % mono-unsaturated and 1 % polyunsaturated fat acids. Macadamias are rich in essential minerals e.g. potassium, phosphorus, calcium as well as in B-vitamins.