The botanical name Corylus originates from the Greek word Korys, hat or helmet and refers to the helmet shaped shell of the hazelnut. 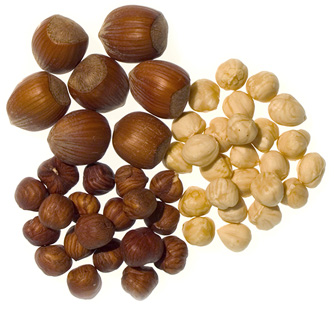 After the last ice age, 10.000 − 7.500 years ago, the hazelnut − belonging to the birch plants − dominated the North European vegetation. As wild growing bush, rarely as a tree, the hazelnut is spread worldwide in all moderate climate zones, from North Africa to Norway (68 degrees of northern latitude), from Ireland to Siberia, Korea, China and Japan.The American east and west coast and the adjoining Canada has a native plant which only carries inconsiderable fruit.

The hazelnut bush is already mentioned long ago in various written historical traditions. Hermes, the Greek messenger of the gods and patron of the traders, carried a hazelnut stick with which he conjured. The Romans sacrificed rams, which they burned on hazelnut´s branches. The Arabs believed that carrying a hazelnut stick was protection from evil. The Italians gave the different hazelnut crossings names of saints. The Alcoran says that the hazelnut is one of the thirty fruits presented by God to Adam after his creation.
For the first time the European hazelnut varieties were imported by America in 1865, by the French migrant ,Pierre Gillet (1835 − 1908). The hazelnut variety nowadays dominating in USA − „Barcelona“ was offered in his catalogue for the first time in 1885. Soon it showed that the Willamette Valley in Oregon between Eugene and Portland has the ideal climate and soil for the hazelnut. The cultivation started there during the 19th century.
All worldwide regions producing the hazelnut commercially, are situated approx. at 45 degrees latitude or more southerly and are close to the seaside. This applies to Spain (Tarragona), Italy (Piemont, Viterbo, Sicily) and also to the Turkish coast of the Black Sea as well as to Oregon´s Willmette Valley. These regions have moderate winters and not too hot summers.

Turkey produces 65−70 % of the world’s crop., Italy 23 %, Spain and Oregon with 3−5 % are approximately of the same rank. The yield of 0,6 tons per hectare in Spain, where irrigation is very expensive, ranges from Turkey’s 0,8 tons to Oregon’s and Italy’s 1,5 tons per hectare. Worldwide are abt. 400 hazelnut varieties registered from which only approx. 20 are suitable for commercial production.

Each hazelnut carries female as well as male blossoms, having totally different looks. The hazelnut aments, known to everyone, are the male organs. Each up to 10 cm long ament supplies 1 − 2 million pollen, while the female influorescences are small and unimpressing. They look like buds, but out of these come carmine red threads, catching the pollen.

Each single blossom embraces two of these threads. The hazelnut has the peculiar characteristic to bloom already in winter (mainly during January and February). As no bees are available at this time, pollination is only done by the wind. The female blossoms of nearly all varieties are sterile against the pollen of the own kind, so that a foreign pollination by a different variety is obligatory. In USA the variety „Barcelona“ preferred in Oregon e.g. is mainly pollinated by „Ennis“. The pollen is absorbed by the totally unripe female blossom, still without an ovary. The tube of the pollen keeps on growing, but the pollination process is interrupted until April at the earliest, at cooler weather even until June. Only over 20 ° C a ripe egg cell develops and finally pollination takes place. The nuts grow in clusters of 2 − 5, but as an exception there can be 10 nuts. The hard shell develops in June and is filled by the kernels during July. The aments and the female blossoms of the following year start to grow in April, appear in June and are fully mature in January.

For commercial cultivation the hazelnut is exclusively vegetatively increased. In Oregon one uses the there developed method of dropping. The flexilble saplings growing out of an at least 3−year old root, are bent to the shape of an ‚U‘ and the curved part is then covered with soil. From a ripe root 4 − 5 saplings can be made to droppers growing ample roots within a year. The saplings are cut off at the top of the new roots and are planted. In North America (and also in Italy) these bushes are raised to trees, which can reach − without lopping − a height of 10 − 15 m.

American plantations do not shake the trees to harvest the hazelnuts. In comparison to the in Turkey and Europe growing varities, the ripe „Barcelona“ drops out of the short calyx by itself. On many plantations one harvests twice with intervals of 2 − 3 weeks. At first the ground is cleared and cleaned of vegetation. A kind of sweeping machine pushes the nuts together between the trees, another machine with vertical rotating rubber blades pushes them on a wire conveyor belt. Leaves, branches, calyxes and soil are blown away by air. The roughly cleaned nuts are placed into an accompagnying trolley and afterwards are sent in boxes to the processing plant.

After a sample is drawn for laboratory´s analysis, the hazelnuts are weighed, cleaned again by air and covered with water. Then they are pumped to the washing station, where they are sprayed with water on a conveyor belt. The nuts are then dried, so that the kernel has a humidity content of 6 %, ensuring well keeping for a longer period. The drying in big wooden silos with content of 120 tons hazelnuts lasts 1 − 2 days. From the bottom luke warm air is pressed into these silos, which will dry the nuts at a temperature of 35 ° − 38 ° C. The dried nuts are assorted to size in a rotating drum. This is effected by the drum‘s holes getting bigger from the back to the front. First the small nuts drop through and finally the biggest. Each different hole corresponds to a grade measured in mm. Hazelnuts in shell are mainly traded at Christmas time.

From October − July the nuts - stored in the refrigerated warehouse - are cracked between rotating steel rolls to obtain the kernels. Then they are assorted according to size and after slight roasting the kernel´s brown skin is mechanically brushed off. These blanched white hazelnutkernels are mainly used for nut mixtures.
Unblanched kernels can also be cut, broken, coarsely ground and pounded into a kind of butter. Hazelnut oil is used for cosmetics and pharmaceutical products.

The nuts have two subspecies:

1) The ZELLERNUSS” (Latin name: Corylus avellana L.) is round and partly covered with a sheath breaking open or folding back when fully ripe.

2)„LAMBERTNUSS“ (Latin name: corylus maxima) is longish and grooved, the sheath does not break open. The ripe nut has to be freed from the sheath.

Turkey:
From the hazelnuts grown in Turkey the „Tombul“ variety has a share of abt. 75% of the total quantity. Because of the thin but strong shell these nuts are especially suitable for cracking.

Italy:
Besides the round „Sizilianer“ and the round „Neapler“ there are also the round „Römer“ having less fat content than the other two varieties and they don´t get polished. The variety „San Giovanni“ are long shaped hazelnuts.

USA:
In USA mainly the varieties „Barcelona“ and „Ennies“ are known which are graded as below:

The hazelnutkernels are assorted according to their quality and also in size.
Apart from the size one differs additionally between natural and blanched kernels.

a) Levantine
These kernels have a low fat content and therefore are difficult to blanch. They are preferred for packing (into retail bags). The „Akcakoca“ hazelnutkernel is a subspecies of the Levantine.

b) Gerisum
This kernel contains more fat than the Levantine, is easy to blanch and preferred by the industry.