The vine was discoverd by the Semits at the southern border of the Caspian Sea abt. 400 BC There the vines entwined around the trees of the forest. The Semits not only liked the sweet juice of the grapes, but they also developed the destillation of alcohol. They called the fermented grape juice Yain or Wain. They also passed the vine and their knowledge of cultivation and production among other things on to the Phoenicians who then gave the knowledge to the Greek and later on to the Spainish people, too. The Romans took the vine over from the Greek and brought it to Gaul and Germania libera. Nowadays grapes grow well in all countries having a suitable climate for wines. Europe really is the world’s vineyard as it produces 2/3 of the total global quantity. The main part of course is used for the production of wine. A considerable portion of the grapes is dried to get raisins or sultanas. These are mostly from seedless grapes, named sultanas. 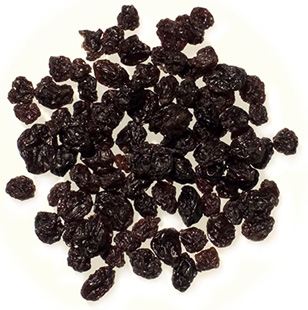 The smallberried seedless grape variety, called in Germany „Schwarze Korinthe” (black currant), is already grown and dried on Peleponnese for many centuries. Its name comes from the Greek seaport Korinth. Already 500 years ago this variety was successfully cultivated on the islands Cephalonia and Zante. Today currants are also grown in South Africa, Australia, California and in Uzbekistan. In the meantime small quantities are available in Turkey, too. Depending on the growing areas on Peloponnese there are different varities. Vostizza currants are the best, of medium quality are the currants from Amalias, Gulf and Patras. Calamata currants are the taillight. Currants are used by the bakery- and confectionary industry. They are sold as a natural, treated or as a biological product. They are placed in dried fruit mixtures, used as healthful snacks, ingredients for breakfast cereals, salads and desserts, They are also used for cooking and baking.

As the grapes, from which the currants are produced, are very much influenced by the climate and weather during growth, the location of the vines is of the utmost importance.

In Greece the Peloponnese is very suitable for the cultivation of currants. Even there are differences. In comparison to the north of Peloponnese where it rains fairly seldom, the vines in the west get a lot of humidity. The westwind absorbing moisture from the sea causes rainfalls on the coastline. This is also the reason for the better quality of the Vostizza currants coming from the north of Peloponnese.

Rain just before harvest is harmful for the grapes as the ground is dry and dusty and does not absorb the moisture. The dry dust turns quickly to a thin layer of mud. Heavy rainfalls are very bad as the mud splashes on the lower branches and grapes. The grapes are then so dirty, that they will not become clean again when processed. If the grapes are too damp, the skin of the dried currant does not turn bluish / black, but reddish / black. The acid’s content of the currant increases and as a result the shelf life is shorter and the currants are less suitable for long storage. The farmers help themselves by covering the vines with plastic in the deciding phase before the harvest.

The berries’ growth begins in March. The first grapes develop in May. are ripe for harvesting at the earliest end of July, latest beginning of September. Shortly before the harvest the vines are sprayed with pesticides, in order to avoid a possible infestation by insects. During harvest time − end of August until beginning of September − the farmers go with all available family members and helpers into the vineyards to cut off the grapes carefully with knifes and scissors. The grapes are then dried most of the times on concrete slabs or white paper in the blazing sun.

During the drying process the grapes lose more and more humidity, so that they shrivel until they finally drop off the stalks. The farmers rake the dried currants together. Depending on the the solar radiation the drying takes between 1 − 3 weeks. Naturally during this time no rainfall must occur. The same as just before harvest the farmers help themselves again with plastic sheets which they can draw quickly over the currants in case of a rain shower.

The production of the currants is principally the same as for sultanas and Thompson seedless. The currants come in baskets or bags from the farms to the factories. Baskets are better as in these the currants will get less pressed. The production starts with the loosening of the raw material. The currants run through a machine loosening any lumps. The next step is washing. The currants swing up through an Archimedes screw, an invention of ancient Greece, which is heavily flushed with water. Then the little stones are eliminated which can still be among the berries. The currants are passed over steps. Each step has a cavity. The currants float on top of water from step to step. The stones are heavier and drop into the cavities of the steps. Now the little capstems must be eliminated from the currants. This is done by a rotating drum having numerous tiny holes. The currants are pressed by the rotation against the wall of the drum. Only the capstems can penetrate into the holes. A knife attached outside the drum cuts the capstems off. the berries. Finally the currants are dried by fans and assorted to various sizes by sifts. They are sent over a conveyor belt spraying oil out of many little nozzles to avoid that the fruit will stick together. This proceedure can be repeated 2 − 3 times, if necessary.

The utmost cleanliness can only be guaranteed by an additional manual assortment. The last pebbles, stalks and capstems are manually assorted on white glass tables. The female workers throw a handful of currants on the table and hear immediately when a little pebble hits the glass. Then this little portion is checked in respect of stalks and stems which can easily be detected on the white surface. Only after that the currants are packed into the carton.

After closing the carton passes under a powerful magnet. In case against expectations metal impurities should be detected e.g. a ring, a hair needle etc. then an acustic alarm will be activated and the production will be stopped.

After each crop the grading is reassessed