Apricots belong to the stone fruit on account of their big stones which have inside bitter or sweet kernels.They are used as a substitute for almonds.

The apricot tree can grow to a height of 5 m. It has big, light pink to white fragrant blossoms, which are directly on the tree´s trunk and branches. The fruit is yellow to orange red, has an orange coloured flesh and a velvet hairy skin only getting soft when fully ripe. 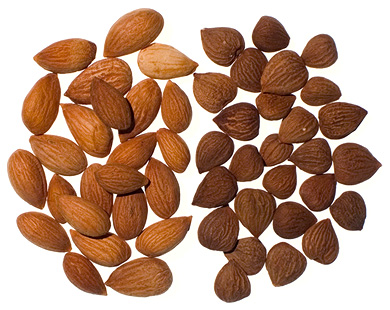 Central Asia is the origin of the apricot tree. During the time of Alexander the Great it was brought into the Mediterranean region. Today it grows mostly in USA, South Africa, Australia and in nearly all Mediterranean countries. Main supplier for sweet dried apricots is Turkey.The main plantations are in Malatya, the centre of East Turkey. Biggest supplier for sour dried apricots is Iran, which has the growing areas in Täbris and Sharoud.

The sweet, but also the bitter apricot kernels, are used for the production of persipan (marzipan substitute), liqueur and oil.

The tree will bear fruit for the first time 4 − 5 years after planting. The first yield will bring abt. 20 kg dried apricots, later increasing to 200 kg.

3.5 − 4.5 kg fresh apricots are needed to produce 1 kg dried apricots. From February until April the tree absorbs the humidity which is returned to the blossoms during the hot months. Bloom is during April and May. This is the most dangerous time as possible night frosts can cause the blossoms to drop off.

The fruit is ripe middle of July and then harvest can start. The apricots dropping off the trees are caught on cloths. In Turkey the sweet apricots are dried with the stones and later sulphured, if necessary.
The stones are pressed out by the help of cylinders and then processed. The original shape of the apricot is maintained during this process.

As the sour apricots are not as fleshy as the sweet ones, the stones can already be removed before drying and sulphuring. The fruit flesh is torn apart and damaged. Sour apricots are therefore seldom used for packing instead they are mainly used for jam production.

Until the nineties of last century the stones of the apricots were to some extent manually cracked by the farmers and their families. Nowadays the shells are only mechanically cracked. Inside are the either sweet or bitter kernels.

By means of wind the broken shells are separated from the kernels, which are later brushed to get rid off the dust. Apricot kernels are filled into bags. In the past the standard content was 80 kg. As this is too heavy for normal handling, nowadays in most cases only bags of 50 kg are traded.

Quality standards are as follows and these limits must not be exceeded: