The fig tree is one of the oldest food and useful plants of the human race. It exists already for 120 million years. During tertiary and quarternary the fig tree was more widely spread than today.
Already in the Old Testament is written that the fig tree existed in the Garden Eden and protected Adam and Eve after they became aware that they were naked. 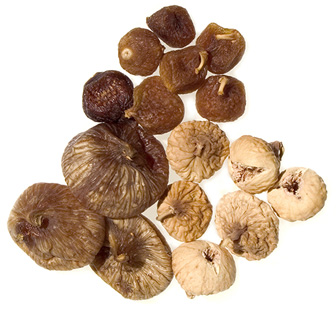 In the ancient world the fig was beside bread, cheese, onions and wine one of the most important basic food. As a symbol of fertility the fig tree was holy to Bachus and Dionysus. The Romans finally brought the tree into their colonies north of the Alps.

Dried figs are used by the bakery- and confectionary industry. Treated, or as biological or soft figs they are traded in different packing units. Figs are taken as ingredients in salads and cereals, but als as starter and dessert. They are processed to fig paste, serving as a laxative, and they are used in alcoholic beverages or as coffee-substitute, too.

The fig tree prefers sunny, hot sites and is very resistant to drought. It does not need irrigation and has hardly any demands to the soil. But it is intolerant towards salt. The main producing countries are Turkey, Italy, Greece, Algeria, Portugal, Spain as well as Iran and USA. The most and best figs come from Turkey. The so called „Smyrna Fig“ is big, soft and has an intensive flavour. The Turkish fig tree is frugal, as no fertilizers and pesticides are applied. It is by nature resistent to most fungus diseases and insects. The fig tree is one of the few fruit trees which does not have to be grafted. It is increased by cuttings which grow easily roots.

Pollination of the figs:

From these eggs hatch insects which are scarcely 1 mm in size. The male is light yellow and wingless, the female is black with a brown head and has wings. The male insects fertilise the female, which fly off to deposit the eggs into other figs, mainly of the female fig trees.

The with pollen loaded female fig wasp enters through a very narrow opening, through which only a fig wasp fits, into the inside of the fruit. While doing so the insect mostly loses its feeler and hurts its wings. Inside it tries to deposit the eggs by biting with its pricker into the blossom’s egg cell. Well the egg cell’s wall of the female blossoms is too thick. The wasp cannot discard its eggs, most of the times the depositing pricker breaks off. The hurt insect crawls out of the fruit and dies without offspring, When trying to lay the eggs, it has scattered the brought pollen and the pollinated figs can now develop. The hatching of the female insects is spread over a longer period so that a small number still remains, when no more female figs are available for pollination. Just at this stage the figs on the male trees are ready for pollination. In this case the pollination combined with eggs’ deposit works, as the egg cells of the male blossoms are thinner. The next generation of insects can develop. In practice the female’s fig tree is pollinated by caprification. This method is as follows:

The figs of the male tree are picked and threaded on a string. This string is then attached to branches of female trees, as the female insects hatching from the male figs don’t fly anymore.

The harvest is rather simple. During dry autum weather the ground below the fig trees must be thoroughly cleaned and then one must wait until the air-dried figs drop off by themselves (10 – 15 kilo per tree). In Turkey the figs are afterwards additionnally dried on wooden racks, which are spread out on the warm ground or on straw.

The biggest problem concerning figs is the mould fungus ‚Aflatoxin’. This most toxic fungus can easily be detected by black light as it is fluorescent. On account of this fact the figs contaminated by Aflatoxine can be easily optically identified. During the packing process several examinations in respect of Aflatoxin are carried out by female workers in dark rooms. They inspect each fig under black light. Normally there are 3 controls: The initial one, when the bulk figs come from the field into the factory. Intermediate checking before the figs are packed and the final one after the retail packages are ready. As the Aflatoxin fungus can also be found in a closed fig, the female workers prick at random with a toothpicker into the fig. After arrival in the factory, the figs are washed with salt water and graded by big sifts. The salt water prevents the figs’ quick saccharification.

The grading is different depending on the origin. Turkey has the biggest share of the market, followed by Greece and Iran. As the Greek and Iranian figs are very similiar, only the Iranian and Turkish figs are considered below.

The sizes are based on the number of figs per 1 kilo:

Iran produces only small figs. One differentiates between soft and hard figs, mostly burst open figs − in diameter of 20 − 28 mm.

The soft figs are not burst open. Iranian figs have a more intensive flavour than the Turkish.

Greek figs are similiar in size to the Turkish, but their outer skin is more woody.

The Iranian hard figs are assorted according to below characteristics:

The Iranian soft figs are not assorted in respect of any other characteristics.