The cashew tree belongs to the same family as the mango or pistachio tree. Its origin is Brasil, where the French naturalist, A. Thevet, described it for the first time in 1558. The tree was exported from Brasil to numerous tropical countries. In South India the yield of the cashew tree proved to be especially good. More than 1/3 of the global production comes from this part of the world, where the cashew nut is called “foreign Mango“. Other important producers are Mozambique, Brasil, Kenia, Vietnam, Indonesia and China. 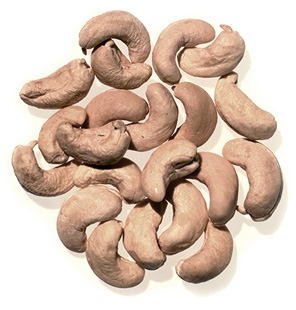 For centuries the Indians were only little interested in the cashew nuts (also called elephant lice or ink nuts). They hoped more that the dense roots, 8 m wide and 1.5 m deep, would stabilize the soil. The climate of South India brings extremely high rainfalls, washing away a lot of soil during each of the two monsoon periods June/July and October/November. After 3,000 − 4,000 mm rainfall, the remainder of the year is dry, which does not harm the cashew tree.

Only since the sixties of last century the cashew nut developed into an important currency importer. The world market pays high prices for Indian cashew nuts and that in the hard currencies of North America, Europe, the Gulf countries and of Japan. In India alone are 200,000 people employed in more than 2,000 cashew processing plants.
Cashew kernels natural or salted are used as snacks. They are an important ingredient for Asiatic dishes, cereals, crackers and salads.

The cashew tree, coming from the tropics, tolerates temperatures between 5° − 45° C. It thrives on poor soils, but does not like very wet ground or wind. A tree’s annual yield is abt. 15 − 30 kg and varies depending on age and location. During its first years it grows annually abt. 80 cm. The yield as well as the growth depends a lot on the outer conditions, as e.g. the altitude of its location or what kind of weather it is exposed to.
The tree bears nuts for the first time after 3 years. It can be said to be the most peculiar nut of all. The cashew nut hangs below a so called cashew apple. Most times only one nut (seed) is hanging there. Several nuts may hang under one apple, which then, on account of lack of space, stick out sideways.The cashew nuts are ripe a fortnight before the cashew apple and drop then to the ground.
The remaining cashew apple is eatable, but tastes furry because of the content of phenol substances. The phenol can be eliminated, so that many products can be processed from the fruit pulp e.g. drinks rich in Vitamin C, jam and spicy sauces.
The country folk collect the cashew nuts for drying. This is either arranged under the sun or in so called tunnel dryers.

The kernel of the cashew nut is in a kidney shaped 2 − 3 mm thick hard wooden shell. In− and outside of the shell is sealed, but its middle is cavernous and filled with the cashew nut oil used by the industry. Basically it consists of Anacard acid (German term), which is processed to synthetic resin, inks as well as to preservation- and lubrication agents.

After 30 years a plantation should be renewed. For it the tree´s trunk is sawn off at the height of 1 m and on a fresthly growing sapling a strong yielding variety is grafted. It grows very quickly and already after one year the first nuts can be harvested.

Many Indian farmers only own a few cashew trees, but there are also big plantations, having trees grown from seeds or saplings. The trees are planted at a distance of 7.5 m. One hectare has space for 180 − 200 trees. While the trees are still small, bananas are grown in between.

The cashew tree produces all year round yellow-pink-red blossoms, but the onset of the fruit concentrates on the months December until February after new leaves established. The blossoms are half female and half male. So called hermaphrodite blossoms are seldom.
25 − 30 days after pollunation by bees the onset of the seed starts. The shell reaches fairly quickly its final size, but only during the later stages of maturity the kernel fills the shell. Within further 60 days the yellow − reddish spurius fruit develops, which grows to a size of a longish shaped apple.

Main harvest time is from February to end of April. A tree bears on an average 12 − 15 kg nuts. The fruit of fhe cashew tree (when much enlarged) reminds of the original structure of the strawberry, which consists of hundreds of small spurious fruit on which ends are the seeds. There are 10 m high cashew trees, but typical are 3 − 5 m. The height of a tree does not effect the harvest, as one waits until the nuts drop off by themselves for collection. Only the nut which separates easily from the apple is of importance for the commerce. The spurious fruit is mainly used by the farmers themselves.

After the freshly harvested nuts are dried in the sun for some days, they are packed into bags, in which they can be stored for up to 6 months without impairment to the quality. The shell of the cashew nut is so hard that it cannot be harmed by insects or even rodents.
There are 3 different ways to roast cashew nuts: The easiest is in barrels, in which the nuts are placed on a red heat rotating steel cylinder. The roasting process is finished after 3 − 5 minutes and the still burning nuts are extinguished with ashes and cooled down. In this way the especially aromatic, gold brown kernels’ are obtained, but the saleable shell oil is lost.

To get the shell oil, the shell bath method is applied. The nuts must be sprayed with water for 1 − 3 days as sufficient moisture must be absorbed by the shell which is very important for the final product´s quality. After that the nuts are placed for 1 − 2 minutes into a big pan filled with cashew nut oil which is heated to abt. 200° C by burning shells This opens the cells of the shells and 50 − 60 % of the enclosed oil leakes out. Any surplus oil is taken out of the pan in regular intervals.

A third method is mild roasting, similiar to the roasting of coffee beans. The shell oil can be obtained in this way, too.

To crack the shells small wooden or steel hammers are used. As top prices are paid for undamaged kernels, it is absolutely necessary to do this with the utmost care. Even a very experienced female worker can only produce daily at the most 8 kg kernels and will only get paid for undamaged ones.
As the shell oil is irritates the skin, before cracking the nuts are put through the alkaline acting ash of the burnt shells. In addition the female workers rub their hands regularly with the ash.
There are simple manually operated machines cutting a notch into the shell before the nuts are cracked by a press. This doubles or triples the productivity of a worker, but needs a lot of experience as the knife must be adjusted very carefully for each nut so that the kernel will not be damaged.

After seperation of the shell the kernel appears with its tough red skin, which must be peeled off. The kernels are dried at 80° − 90°C for 3 − 7 hours on roasting grates in an closed oven, stoked with cashew shells. As only little humidity escapes, the drying process is rather slow. After cooling the loose-fitting skin is manually eliminated, still sticking remnants of skin are scraped off by a little bamboo cane. The kernels are so precious that it is worthwhile to inspect and assort any kernels with remaining fragments of skin.

After peeling the kernels are manually assorted into 3 categories: Whole, split and broken. The whole kernels are additionally assorted; the trade differs between a total of 26 varieties. Especially during the summer the kernels are after peeling so dry, that they break easily during transportation. For this reason the nuts are spread out on metal sheets and kept in a humid atmosphere for some days. Finally the cashew nuts are packed into vacuum tins with contents of 10 kg or 25 lb which are then filled with carbon dioxide and sealed.
During the last years the tins were replaced more by vacuum bags. In these packing units the cashew nuts are exported. For the retail trade the nuts are locally roasted, salted and packed into cellophane bags or tins.

The grading of cashew kernels is a science on its own. There are two methods. One is practiced in Africa and India and is well established, the other comes from Brasil. It is similiar to the African/Indian method, but not as logic and is therefore neglected.

Cashew kernels are assorted into 3 categories:

One differs between whole or broken kernels, if light or dark in colour and finally according to size − based on number of kernels per lb. In order to classify the kernels precisely, there are abbreviations for the 3 categories as mentioned below.

1) Condition of kernels according to damage

a) Wholes (abbreviation “W“)
Undamaged cashew kernels are called in the trade: “Wholes“.

b) Butts (abbreviation “B“)
Is the cashew kernel only once diagonally broken to the longitudinal axis, then the commerce speaks of “Butts“.

2) Condition of kernels with regard to discoloration

The cashew kernels should always be light in colour, preferably even white or of a pale ivory. These kernels are classified as “WHITE“ (one has no abbreviation for “White“).
If no colour is mentioned, it can be assumed that they are of light in colour.
As the cashew kernels will be dried and roasted during processing, it is possible that they turn dark or brownish respectively. Such kernels are classified as “Scorched“ (abbreviation “S“).

3) Categorisation of the undamaged kernels according to size

Each category gets its identification by the maximum number of kernels per pound.

There are no standards per lb for broken kernels.
The description “B“ is used for light coloured brokens with diagonal break to the longitudinal axis, the so called “Butts“. Whereas “SB“ are dark Butts.