The apple originates from the mountain regions of South West China. Forefathers of our today’s „eating apples” are the Caucasian / Altei varieties. The Altai apple can still be found near Alma Ata, which means translated „city of apple”. From Middle Asia the apple came over the old trading routes into the Black sea area.

Already in ancient Greece the apple was cultivated and by „grafting” a kind of vegetive reproduction developed. The specific development of apple varieties only started at the beginning of the 19th century. China is by far the most important producer of apples, followed by USA. Half of the apples on the German market are locally grown, but Germany is at the same time the biggest importer. 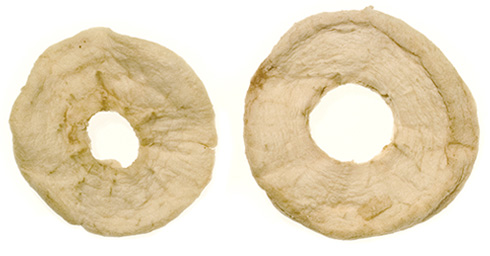 In cultural history the apple also has a big importance, too. Already in ancient times an apple was a symbol of love and fertility. So no wonder that it was made responsible for the fall of mankind. The old Greek and Romans regarded apples as an aphrodisiac. The orb made history as a symbol for tradition and sovereignty and the monarchs held in their left hand during the coronation’s ceremony.

Apples for drying are mostly grown in China, but also in USA. In Europe Italy, Netherlands and Turkey belong to the biggest producers. Argentine is in South America a top producer and Australia and Canada must be mentioned, too.

Dried apple rings are put in dried fruit mixtures. They are also used as ingredients for cereals, baby food and stewed for desserts.

Apples can be successfully grown worldwide in nearly all temperate zones. There are varieties which are suitable for most climates, including those with very low temperatures during winter. These varieties need at least 900 hours below 7° C to reach full blossom.

The fresh apples are washed, assorted according to size, peeled or unpeeled cored, cut as required (into rings, quarters, cubes, etc.) and then only dried. In underdeveloped countries the apples are dried in the sun. In developed countries the drying is mostly effected in hot air tunnels and lasts approx. 3 to 4 days. Following varieties of dried apples are available: apple rings with and without skin, low moisture 18 % high moisture 24 %, diced apples with and without skin low moisture 3−5 % high moisture 22 %, 5 x 5 mm 10 x 10 mm based on the fresh cut.

Dried apples with different moisture levels can be produced upon request.

The next production step of the dried apples is washing to get rid off the dirt. Depending on if unsulphured or sulphured goods are ordered, the apples are treated differently. The light white colour of the cut apples can be maintained by adding sulphur. Alternatively sea salt and citric acid can be used.

To kill any vermin the apples are fumigated just before shipment.

Fresh apples are kept in cold storage until they are needed.

Ringapples are ungraded. The only difference is the shape into which a dried apple was cut, rings, quarters or cubes.