Apricots belong to the stone−fruit because of their big stones having bitter or sweet kernels inside. These are used as a substitute for almonds.

The apricot tree can reach a height of 5 m. It has big, light pink to white fragrant blossoms, placed directly at the tree´s trunk or branches. The apricots are yellow to red orange with an orange coloured flesh and a hairy velvet skin which becomes only soft when fully ripe. 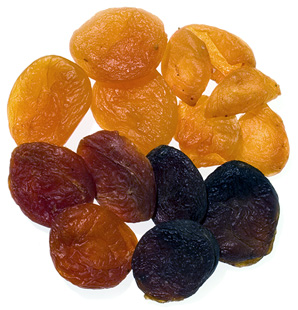 There are more than 40 different varieties. Apart from the wild growing, slightly sour apricots, sweet ones from grafted trees are available, too.

Central Asia is the home country of the apricot tree. It came into the Mediterranean region during the reign of Alexander the Great. Today it grows mostly in USA, South Africa, Australia and in nearly all Mediterranean countries. Main supplier of sweet dried apricots is Turkey. The biggest orchards are around Malatya, in the centre of East Turkey. Iran is the main supplier of sour dried industrial apricots. The plantations are in Täbris and Sharoud.
Dried apricots are used by the baking− and confectionary industry. Bio− or soft apricots are much liked as a snack. Dried apricots are used in dried fruit mixtures or as an ingredient for cereals and they are stewed for desserts.

After planting the apricot tree takes 4 − 5 years to mature and then it will have its first crop. The first yield will bring abt. 20 kg apricots, which can increase later to 200 kg.

All sweet apricots are a new variety created by humans, by grafting apricots on plum trees. This special grafting brings better results: 1st the fruit becomes sweet and 2nd the yield is a lot higher.

To get 1 kg of dried apricots 3.5 to 4.5 kg of fresh fruit is needed. From February until April the tree absorbs humidity, which it returns to the blossoms during the hot months.

The bloom is during April and May. This is the most dangerous time as possible night frosts might cause the blossoms to die off.

The fruit is ripe middle of July and then harvesting can start. The apricots falling off the trees are collected on cloth. Then they will be sulphured on wooden pallets in closed premises for 24 hours.

The sulphuring has two effects:
1) All insects and bacteria are killed and the fruit keeps longer.
2) The brown colour of the ripe fruit changes to a glowing orange.
Sulphur is an explosive subject as the EU allows only 2.000 ppm. The sulphuring facilities in Iran and Turkey are fairly primitive and the max. permitted sulphur level is very often exceeded. The farmers want that the apricots keep well for a long period and therefore use much sulphur rather than only little. If the apricots are unsulphured, they will be darkish brownish in colour. They lose some of the sweetness, but have a more intensive taste.

After sulphuring the apricots are placed into the sun to dry for 3 to 4 days. Then the stones are removed by female workers and after that the fruit is dried once more in the sun for additional 3 to 4 days. After this process the dried apricots are sent in linnen bags to the factory.

At first the apricots are washed and then graded on agitating sifts. These sifts move the apricots into one direction. At the front of the sifts are little holes through which the small apricots drop. Then follow the bigger holes until finally only the big apricots are left over.

Later the apricots are washed once more and are dried in a centrifuge. Female workers check the apricots on big tables concerning impurities and black spots which could result from hail damage. After this the apricots are analysed in respect of suphur and humidity, then they are packed.

Humidity content must not exceed 24% otherwise the apricots mould and ferment very quickly..In EU the max. permitted level of sulphur must not be higher than 2,000 ppm. In USA the max. level is 3,000 ppm.

Turkey, world´s largest producer of dried apricots has the best system of grading. Iran produces also big quantities of apricots, but there one differs only between Gheisi and industrial apricots.

Turkey assorts in respect of size which is based on number of apricots per 1 kg and makes a difference between sulphured and unsulphured merchandise. This applies only to the the sweet Malatya apricots. The sour Urgup apricots are not assorted as these are mainly used for industrial purposes.

Besides the Turkish grading an American system was introduced, which is also practiced by Australia, South Africa and Argentine.

This system is not based on the number of apricots, but on the size of the fruit itself. While in Turkey small and big apricots result in a certain number per kg, the apricots in USA must all be of the same size.