Almonds are the oval shaped stone fruit of the almond tree. The tree is small, grows to a height of up to 6 m and its origin is the family of rose plants as e.g. also the peach-, plum- and the cherry tree.
It comes from the border regions between south Russia, Afghanistan and Iran. The fruit, cherished for at least 4.000 years, is similiar to a small, very hairy peach. In comparison to the fruit of the other prunus varieties not the fruit flesh, but the sweet kernel inside the fruit is eaten. There also exixt bitter almonds containing glykoside amygydalin from which almond oil is processed. 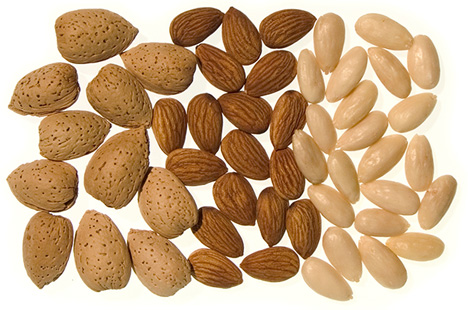 During the 17th century the Spanish Franciscan monks brought the first almond trees to California. Commercial plantations developed only 200 years later in the hills west of the Sierra Nevada where the trees, sensitive to frost, were not exposed to any accumulation of cold air. The yields of these genuine mono crops were badly disappointing, but not only on account of the dry and poor soil. Only after decades it was noticed that a foreign pollunation of the almond tree is obligatory.
Today US almonds are grown in California and cover more than half of the global demand. More than 210.000 hectares of the Central Valley are planted with almond trees. Each year 250.000 − 300.000 tons of almonds are harvested. Most important competitors of California are Spain with annually 40.000 − 75.000 tons and Italy with 10.000 − 20.000 tons yearly.

Almonds are used by the bakery- and confectionary industry. They are used as snacks and also for the production of marzipan, almond oil. Almond bran is used for cosmetic purpuses.

Almond trees are mainly grafted on peach wood, which supplies a quickly growing surface well adapted to artificial irrigation. The peach sapling with roots is trimmed to a length of some centimeters. On the cut surface a single bud is grafted coming from an 6 − 8 months old almond sapling. This proceedure needs a sure instinct, but if it is successful, , the bud develops quickly into a sapling growing within a year taller than 1 m.
These saplings, from which in California more than several hundredthousand are annually grown, are planted during the winter in straight rows 6 – 7,5 m apart. The lower portion is placed into a milk carton to protect the bark against nibbles by rodents.

During the first summer a lot of irrigation is necessary and during the second year the plants are cut back a lot to define the future shape of the tree with 3 main branches. At the end of that year a second floor of 3 branches is grown. In the 3rd year the tree carries its first almonds, but not enough for harvesting. This will only be worthwhile during the 4th year.

From then on the yield will increase each year. In autumn redundant branches are taken out of the inner crown. After the 8th year the trees are trimmed back by abt. 20 %.
The trees will be kept for 20 − 25 years. After that the plantations will be cleared, the ground ploughed 1,5 m deep and bulldozed for new plants.

In February and March the almond trees bloom. Then the weather must remain dry, otherwise the bees cannot leave their hives. When it rains putrefactive fungus spreads on the almond blossoms and treatment with pesticides is necessary. Vermin of the summer are mites clinging to leaves and sucking out the juice.

During the dry season irrigation is necessary, mainly by water saving micro sprinklers (releasing water from hoses in regular intervals) or by trickling irrigation method (water coming very slowly out of the hoses). Weeds and gras are permitted to grow between the rows of trees or useful vegetation is planted on purpose. Only shortly before the harvest this undergrowth is mown. This creates a natural carpet from which the almonds fallen off the trees.can be very quickly collected by machines with a minimum of foreign material.

The harvest of the almonds is totally mechanized. It starts end of August with the variety „Non pareil“ and lasts until middle of October with later maturing varieties. Before harvest the almond trees are exposed for 3 − 4 weeks to moderate dry conditions. This facilitates the dropping of the fruit. As soon as the fruit flesh is reasonably dry and breaks open, the shaking machines can start.

Each tree is clasped at the trunk by rubber covered pliers, eccentric cam driven and heavily vibrating resulting in an averlanche of fruit and leaves. The almonds will remain on the ground for abt. one week, so that they will dry well. Fans blow all almonds between the rows of the trees. Finally they are collected by machines similiar to snow ploughs, then taken up by rotating rakes and stowed pneumatically into transport lorries, where at the same time dust, branches and leaves are eliminated by air. Remaining dry fruit flesh is taken off by spinning the almonds around in a machine. The fruit flesh is used as fodder.

The shells of the almonds are gently broken by cylinders with exactly adjusted clearances and then eliminated by air.. Now the actual processing of the almonds starts.

The first step is to assort the almonds according to size by vibrating belt conveyors and sifts. Highly sensitive electronic devices and magnets assure that no fragments of shells, branches, drops of resin, tiny pebbles or metal pieces will remain among the almonds.
The next step is the visual examination on conveyor belts to detect damages. At the same time the last impurities are eliminated.
Damaged almonds are finely ground and by adding water, syrup, flavours are processed hot to a paste, used by the bakery– and confectionary industry.

The assortment of almond kernels (below only named almonds) is very elaborate, while the almonds in shell are only differentiated according to their origin.

Almonds can be assorted by 3 methods:

The different biolocal almond varieties, the count or size as well as the quality with regard to cleanliness and damage.

Hundreds of different varieties are available worldwide. Below only the most known of the 2 main producing countries, USA and Spain, are taken into consideration.

a) Nonpareil
USA is the biggest producer of almonds and the Nonpareil variety is the most widely spread. It is worldwide the best known for the following reasons..Nonpareil mature earlier than others, this kind is lightcoloured and easy to blanch or chop. The kernels are homogenously in shape and fairly flat.

b) California
California is in fact the description for many almond varieties. The quality is not quite equivalent to Nonpareil, but it is better than „Mission”. The California has a darker skin and a stronger flavour than Nonpareil. In comparison to the Mission California can be blanched.

c) Carmel
From all Californian varieties the Carmel is the most frequent type. Very similiar to Nonpareil and worthwhile to mention.

d) Mission
The same as the California the Mission almonds are more a summary of different varieties. They all have a dark skin and a strong flavour. The Mission is difficult to blanch and therefore it is rather used by the confectionary- / ice cream industry.

e) Neplus
The Neplus variety is the rear end light of the American almonds. It is very dark and as the Mission type it cannot be blanched and because of its poor quality it is not even graded. This variety can only be used for the production of marzipan.

In Spain the almonds are differentiated as follows:

b) Valencia
This almond is more rounded and qualitywise not as good as the Larguetta.
Generally it has to be mentioned that the Spanish almonds have a portion of 1 – 2 % bitter almonds, while the US–almonds are 100 % sweet.

2) Size and count of almonds

USDA (United States Department of Agriculture) fixed the exact requirements for the quality of each variety. There are several facts to be observed as e.g. percentage of impurities, half or damaged kernels, gnawed by vermin etc.

The almonds in shell are not assorted. They are only differentiated in respect of the kind of its country of origin.

Almonds in shell are practically only offered at Christmas time. The variety Cartagena has such a soft shell, so that it can be nearly cracked by hand.