The peanut is not a nut, but a pulse, very rich in protein. The plant producing it belongs to the family Leguminosa as e.g. the peas, too. It is grown on a big scale in India, China, USA and in many subtropical and tropical countries.

The origin of the peanut is relatively unknown. Although the peanut was mentioned for the first time approximately 950 B.C., one presumes that its origin is Brazil or Peru. Spanish and Portuguese conquerors brought the plant to Europe and from there to Africa and the Far East. The peanut was returned from West Africa by the slave trade via the Atlantic to USA, where it was already cultivated during the 18th century. For a long time it was regarded as food for animals and poor people and was therefore frowned upon. Only during the 20th century it became in addition to cotton one of the most important economic plants of the southern states of USA. 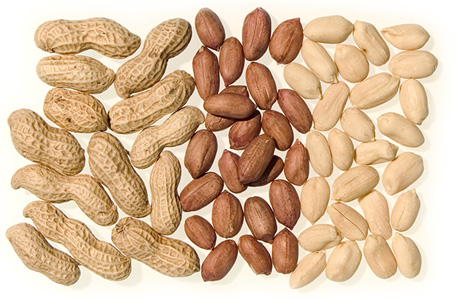 The annual peanut production amounts to approx. 29 million tons. Apart from Senegal, Malawi, South Africa, USA and Nigeria, are India and China the biggest producers. They grow abt. 2⁄3 of the total quantity. The biggest portion is used by these countries for the production of peanut oil. Worldwide „only“ 1.5 million tons are exported. Europe imports the most, explicitly France, UK, Germany and the Netherlands, followed by Indonesia, Canada and Japan. USA is with 240.000 tons alongside Argentine, China and India one of the biggest exporters of peanuts – fit for human consumption.

After the seed is planted abt. 5 cm deep into the ground, it grows within a month to a height of 20 ⁄ 40 cm. Then yellow blossoms appear, mostly with 2 ovaries. From the blossom grows after pollination a 15 cm long fruit stem pointing downwards which has at its end the embryos from which later the peanuts develop. Upon contact with the earth, it hunches down and grows some centimeters deep into the ground. There the pale yellow fruit absorbs directly water, potassium and calcium.

The unsmooth, weblike structured fruit shell, slimmer in the middle, has when fully matured inside 2 oval shaped kernels 10 ⁄ 20 mm long. Constantly new blossoms appear, so that the plant carries always blossoms and fruit at all stages of development. Depending on the variety, it takes approx. 6 months from planting to harvest. The weather should preferably remain warm and damp as long as possible during growth, whereas at harvest it should be dry. A well watered, sandy loamy soil is ideal for the peanuts. Its pH⁄value should range within 6 ⁄ 6,4. It is impossible to grow peanuts continuously, as this would strain the soil. The best is to alternate with corn and potatoes. In some countries e.g. in Brazhe peanuts can be harvested even twice in one year. The first crop will be during December/January and the second one during June/July. In most cases the first crop is bigger than the second one, which is often during the rainy season.

The harvest begins end of August and can last until November. It is very difficult to ascertain the right time to obtain a maximum yield of best quality. Especially during the last 2 weeks of maturity, the nuts gain a lot of weight. In order to determine the degree of maturity, some peanuts are dug out and scraped with a knife. With advancing maturity the scoured area turns white, yellow, brown and finally black. Black means, the fruit is fully ripe. If the harvest does not begin immediately, the peanuts drop off the stems during the harvest and are lost.

In USA the harvest is effected in 2 stages. At first a so called digger drives along the furrows. Its attached horizontal blade is drawn through the ground at a depth of 10 − 15 cm.The taproots of the peanut plant, going approx. 1, 8 m into the ground, are cut off.. Behind the blade the plants are lifted up, shaken and turned upside down, so that the peanuts are resting on top of the soil and can dry. In China and India this is still done to a great extent by manual labour.

After 2 ⁄ 3 days the harvesting machine picks up the complete plants, threshing them while the peanuts are carefully shaken off. The nuts are collected in a container which is carried along. The remainder is eliminated as mulch or pressed into balls of hay, rich in protein, which is much liked by the cattle.
In India and China the peanut plants are manually cleared and stored on so called „stacks“, whereupon the nuts are deposited inside and the foliage outside. To protect these stacks from rain they are additionally covered with foliage. At harvest time the rawmaterial has a moisture content of 20 ⁄ 24 %. After 4 weeks of storing the humidity is reduced to approx. 7 %.
Before the transport to the factory the nuts are separated by hand from the foliage.

Before processing the peanuts are thoroughly cleaned by vibrating sifts followed by air separation. They are assorted into 3 sizes by screen meshing. Afterwards they go along a system of horizontally placed lank cylinders, which rotate at slightly different speeds. By this process the shells are broken and pulled away by air, while the kernels pass to a great extent undamaged between the cylinders.
Any remaining shells are eliminated by air. The kernels are divided into numerous streams passing through a system of light barriers and photo cells. Each deviation from desired shape or colour causes an air draught sending inferior and broken kernels into a separate container. In China and India such a system is only just starting to be introduced as the work there is still mainly done by manual labour.

The waste is roasted, ground and pressed to oil, which is either used as edible oil or for the production of margarine, soap, coating compounds and pharmaceutical products.
In USA only fairly small quantities of peanut oil are produced, as the concentration is on top quality kernels for the snack market which bring higher prices.

Whereas in China and in India oil is the main peanut product. The filter cake, residue from pressing, is a high valued animal fodder. For this purpose the peanut shells with high content of cellulose can be used, too.

The undamaged kernels are assorted by sifting.

The cleaned and assorted peanut kernels are covered by a brownish−red skin. It is eliminated by careful blanching, as the kernels must not be split or broken.

There are five different ways to peel off the skin of the peanut kernel.

The unskinned peanut kernels are heated for abt. 25 minutes to 280° F. After they are cooled down again, they run over 2 rubber covered rolls. One of these rolls has in addition naps and grooves. During this process the skin is really rubbed off and breaking some kernels, resulting in abt. 12 % loss of weight.

The unskinned peanut kernels slide over a grid with sharp edges. This damages the skin of the kernels a lot, then the kernels are sprayed with warm water. After the damaged skin is loose, the blanched kernels are dried.

The skin of the peanut kernels is slightly lifted by razor sharp blades in order to be peeled off later by warm water. Then follows the drying.

The unskinned peanut kernels run over horizontally placed counterrotating cylinders covered with fine abrasives. These cylinders bring the peanut kernels into rapid rotation of their longitudinal axis, so that by rubbing the kernels against each other and against the surface of the cylinder the skin comes off. At the same time the surface of the kernels is roughend, which improves the adhesiveness when later salt or sugar are added.

The unskinned kernels are dipped into a chemical solution for abt. 8 seconds, so that the skin peels off. This method damages the kernels the least. The taste of the peanut kernels is not harmed and even a longer storage is possible. Admittedly Alkali-blanching is the most expensive.

In the meantime many varieties of peanuts exist, but only 4 kind are quantitatively very present worldwide.

This type is a crossing between the „Virginia“ and the „Spanish“ peanut. Since the beginning of the 70s of last century this variety is very popular. The kernels are available in many different sizes, but they are mainly „round“. They are used for the production of peanut butter, too.
In India this variety is called „Bombay bold“ and in China „Hsu Ji“.

This variety has the biggest kernels, which are more longish, and has the name from the growing area being its origin in the first place − Virginia, USA. It is traded as kernel and as peanut in shell. The kernels are mainly used for roasting and salting. On account of its rather big kernels it has worldwide a classification referring to this fact. In Egypt it is called „Egyptian Giant“ and in China „Large Size“.

This variety has smaller kernels, covered by a brownish skin. They get mainly coated with sugar, but they can also be taken for roasting and salting as well as for the production of peanut butter.

Depending on the origin (growing area) of this variety, the name differs.
In South Africa it is called „Natal“ or „Sellie“, in China „Guan Dong“, in Paraguay „Paraguay kernel“, in Argentina „Light Skin“ or „Manfredi“ and in India „Java“-

The peanuts in shell and peanut kernels are classified according to their numbers per ounce (oz. =28,35 g).

One differs between „long type“ (Virginia or e.g. Chinese count) or „round type“ (Runner or e.g. Hsu Ji). The grades differ, dependingon if long or round shape.