There are approx. 100 different kind of pines. They can be found in the Eurasian arctic, the moderate European zones, the Mediterranean areas, North Africa, the Canadian Taiga and in mid and south of North America, Central America and even in tropical Indonesia. 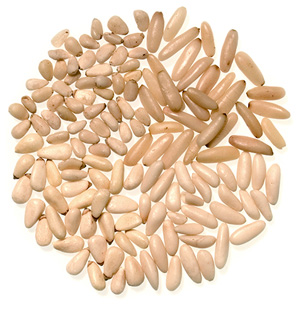 As an evergreen tree the pine was regarded as symbol for vitality and fertility in the Mediterreanean area. In oriental cultures it stands also − maybe because it grows very often by itself and overlooks other trees − for courage, steadfastness, straightness and strength of character.
Significant for these trees are the needle shaped leaves growing in numbers of 2, 3 or 5 on short saplings which can get 5 − 30 cm long. From the female blossoms develop the wooden, scaly cones containing the peripteral seeds arranged in pairs.

The Swiss stone pine (Pinus Cembra) or the pine (Pinus Pinea) supply the edible seeds. These pines presumably originate from the Iberian peninsula grow to a height of 30 m and can be recognised by a crown shaped similar to an umbrella. The trees can become 200 years old and there are also trees having reached an age of 400 years. Besides the cypress it is the most distinctive tree of the Medeterranean area. It was already mentioned by Homer. Plinius maior described four varieties of pinenut kernels which were used in those days for medical treatment against stomach pains, kidney troubles and tubercolosis.

The trade roughly differs between 3 varieties of pinenut kernels.
The Asiatic ones come mainly from China. There are also pinenut kernels from Mongolia or Siberia which are the seeds of the Swiss stone pine. They are rather round, taste floury and are yellow to white in colour.
The pinenut kernels from the Middle East are to a great extent from Afghanistan and Pakistan. They are from a subspecy. The kernels are longish, taste sweet and are of a white / ivory colour. In all Mediterranean countries − from Portugal via Italy to Turkey − the third variety of pinenut kernels is harvested. These kernels are also a subspecy, but in comparison to their relatives from the Middle East they do not taste sweet and are also not quite so long, but of the same colour.
Pinenut kernels are used by the bakery− and confectionary industry. They are also taken for salads and rice dishes. The full taste develops only after short roasting or frying.

The pine tree loving the warmth is very tough and grows even very well on unfertile, stony soil. It prefers sand, but also lime, clay or loam are sufficient. The average annual temperature should be at least 10° − 11° C. The best annual rainfall is between 400 − 800 mm. It can grow from sea level up to a height of slightly more than 1,000 m. Thanks to its in some cases 40 m wide spread out roots, the pine is very well adapted to the long, hot and dry summers of the Mediterranean Sea. Its mass beyond the ground can be bigger than on the top.

The Mediterranean pinenut kernels are from Pinus Pinea (umbrella crown) which cones − egg− or heartshaped − weigh 200 g − 400 g, exceptionally 1 kilo. These cones develop invidually, in pairs or in groups out of the pollinated female inflorescense looking already like tiny pine cones. Pollen supply the grain like male fluorescences growing at the lower part of older tree’s crowns. For 15 − 18 years the monoecious pines produce only female blossoms, afterwards appear male blossoms, too.
Pollination is solely done by the wind blowing big clouds of the yellow powder through the forests. The pollen travel a medium distance of 150 − 200 m, in some cases they can fly several hundred of kilometers.
Only one pollen from 10 million will finally strike a female blossom. The egg cell only forms after the tissues for nutrition are available − this will be after 2 years. Then a female gamete develops and the male blossom can finally pollinate the gamete.

Three months later the embryo starts to grow vigorously. The cones need nearly 3 years to mature. After a year they reach a diameter of 2 − 3 cm, after 2 years they will be twice as big. From December to March during the third they will be harvested. At this stage they will be 12 − 18 cm long.
Under the scales, spiral shaped around the centre of the cone, are parallel located 15 − 12 mm long hard shell seeds. One cone contains on an average 120 kernels. They are covered with a violet−black powder which can be easily rubbed off when they are fully ripe. In addition they have a very small, only loosely attached non-functioning wing.
When the shell is cracked appears the edible kernel, 10 − 15 mm long, looking like a very big rice grain. The seeds represent abt. 18% in weight of the fresh cone, but when shelled remain only 3% − 5%.

The cones are harvested during winter when they are closely sealed. If one waits too long, the ripe cones open during spring, the seeds drop out and are lost. In order to harvest the pine cones, the workers must climb the trees. They attach climbing irons to their feet, place a 6 m long aluminium climbing stick with a hook into a tree’s crotch and prop the feet into the bark to scramble up the tree. Fixed to the worker’s belt is another 3.8 m long cane with an iron hook for detaching the cones which are afterwards collected from the ground.

When the trunks are 10 − 15 m high, the harvest will become very troublesome and dangerous, often resulting in very bad or even mortal accidents. As the ripe cones are firmly attached to the branches, manual picking is still necessary as there are no suitable machines.
In the previous pine forests an average yield of abt. 500 cones per tree can be expected, in weight slightly less than 170 kilos. The yield differs very much from one year to the next and even from tree to tree. It is said that there are trees growing at the banks of rivers or in parks with a bumper crop of 2,300 ripe cones.

During the first step of processing the cones are squashed to get scales and pinenut kernels. For this the cones pass between 2 roughly pimpled cylinders. Out of the obtained mixture the kernels are eliminated, dust, skin of wings and pieces of scales are separated by air. The scales are burnt for heating the premises and for steam production.
In order to get the kernels the seeds are sprayed with water and then stored moist in a silo for 24 hours. During this time the seeds absorb some moisture and become pliable. They remain undamaged when the shells are dry again and are forced open between in opposite direction rotating cylinders with adjustable clearance.
Separation of shells from the kernels is by means of several sifts and by applying air.
Now the pinenut kernels are only covered with a thin skin. In order to peel it off, the kernels are scalded for a short time in hot water. It softens the skin, so that it can be abraded by rubber covered cylinders. In Pakistan and China, in those countries where the wages are fairly low, the workers rub the kernels with clean cloths to take off the skin.

Only in China the pinenut kernels are graded to a bigger extent. In the other 2 cultivation areas of Pakistan and in Mediterranean countries e.g. Spain, Portugal, Italy and Turkey one differs only between Grade A and Grade B.

In China grading is mainly according to size. This country has several kind of pinenut kernels differing in size and price.