The pecan nuts are the fruit of the Hickory tree which grows in the mid to south latitudes of North America. From Illinois via the Mississipi valley to Mexico there are 20 varieties of this tree belonging to the walnut family. They grow 30 m high and can become several hundred years old. Its tough, hard wood very resistant to vibration was used by the red skins for making tomahawks. Later this wood was taken for the production of carriage wheels, skies and hockey rackets. Nowadays this wood is nearly exclusively used for paper production. 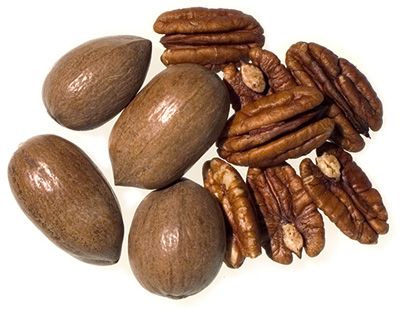 One variety of this Hickory-tree, the Caraya illionensis, supplies the high valued, delicious tasting nut. Its shell is remarkably thin , smooth and very often has dark stripes. The colour is mainly greyish. For export they are bleached, dyed red-brown and polished so that they will look better. In ancient times the red-skins already collected the pecans in big quantities to store them for the winter. After the white settlers arrived they used these nuts in exchange for other goods. Latest since 1761 the pecan nuts were transported to England. There it was quickly noticed that they taste better than the European walnuts.
In North America the trees grew wild until the middle of the 18th century. The first commercial plantation was most likely established in 1846 and the trade with these nuts really got going after 1870.
In the course of time by mixing and selection more than 1.000 varities of pecans were created and thanks to the genetically big diversity the growing area of the pecan tree was much enlarged. Today the trees grow everywhere in the south of USA, but the main production region is in Albany, the south of Georgia. In these parts big areas were very early sporadically planted with this tree. Sandy soils with good drainage are very suitable.
Well known are the varities „Cape Fear“, „Curtis“, „Desireable“, „Elliott“, „Sumner“, „Stuart“ and „Gloria Grande“. The last named are especially big and look very attractive.

Today Georgia supplies in a good year more than 75.000 tons pecans, nearly half of USA´s total production of abt. 170.000 tons. On account of the big demand the plantations expand very quickly − especially in East Georgia. In the meantime peach plantations, which became unprofitable, also grow pecan trees. The modern varieties, increased by grafting, have already a commercial yield after 8-12 years and then the peach trees can be cut down.
Texas and New Mexico are the biggest producers after Georgia. The pecans are also grown in South Africa and Australia. The crop in these countries is rather small in comparison to USA.

Usually the pecan trees are planted 12 m apart. Later each second tree in exchanging order of rows is thinned out. This results in the mutual distance of abt. 17 m between the trees. Along the rows of trees abt. 3 m are treated with herbicides to stop the gras growing and in the remaining parts the gras is kept short. The trees need intensive care to optimize the yield.

During spring it is necessary to battle against leaf eating insects. In the summer other insects are harmful which can penetrate through the shell into the nut. To this category belongs the so called „pecan nut gnawer“ which deposits his eggs directly into the pecan kernel. The larva eats the kernel and then drops to the ground where it pupates to reappear after 2 – 3 years as a sexually matured insect.
Bugs are also very harmful as they drill into the young fruit. They are easily antagonized by Pheromone traps. (The Pheromone traps emit scents of the female bugs attracting the male bugs into the traps where they are killed by water, heat, glue or any other substances.)
Pecan farmers´s big problem are scab diseases caused by fungus. The are treated with pesticides, not to be used too often. For effective spraying high powered machines are needed, so that the crowns of the trees, growing to a height of abt. 30 m, can be reached. In most locations irrigation is necessary to get a good yield, especially during July and August when the nut grows quickly and the shell hardens. To avoid early leaf dropping and to extend the photosynthesis as long as possible sporadic irrigation until the first frost is effective. This secures the development of big nuts.

Taking the average of several years a quantity of 1,6 − 1,8 tons can be expected per hectare. Without watering the yield would only be half. The pecan nut tree carries blossoms of both sexes. The male blossoms, the so called aments, grow on one year old wood. At the end of the branches, the youngest wood, develop the small inconspicuous female blossoms.
From beginning of April either the male or the female blossoms – depending on the kind – open first, but not both at the same time. Therefore an effective cross-pollination is most important. For this reason on each plantation grow two different varieties of pecans. Bees and other insects are not attracted by the blossoms, so that pollination is only possible by wind.
Pecan nuts grow in clusters of 2 − 20 +. Ideal are clusters of 2 – 3 nuts.
As most fruit trees the pecan´s yield is very cyclical. It means after a very big crop the next will be medium and the following small.
Despite extensive trials so far it was impossible to develop uncyclical varieties.

It is an advantage when growing pecans that all necessary annual tasks on a 150 hectares plantation can be done by only one worker. This includes the fully mechanical harvest during October. When the nuts are ripe it is sufficient to shake them off the trees for collection within 2−3 weeks. For it machines with scissors-like gripping devices are applied to the trunks and bigger branches. The nuts drop out of the four divisioned shells to the ground and then are blown into heaps on the gras-free areas between the trees.
A machine with attached rubber blades collects the nuts and at the same time frees these by wind of foreign matters e.g. soil, leaves and little twigs.
After that the nuts glide into an accompagnying trailer. Early harvested nuts must be dried by warm air of 32−35° C to obtain a moisture content of 4-5 % for better keeping. This process is unneccessary when the nuts are harvested in November as they then as a rule already dry enough for storage. The nuts are fumigated immediately after the harvest to kill any vermin.

The nuts are assorted according to size by sifts. Afterwards they are sent over a sorting table to eliminate the inferior nuts. The nuts keep well in normal cool premises at 7° C between 6–12 months max. Throughout the year they are processed to kernels, broken kernels and nut granulate / flour. Before cracking the shells, moisture is applied to the nuts, either by cold water or by hot steam. For breaking the shells hammer like acting pistons or parallel attached eccentrically rotating cylinders with adjustable clearances are used. The separation of the shells from the kernels is at first done by coarse sifting, then afterwards by placing into water. The shells soak up the water and drop down while the kernels float at the top. Finally the kernels are dried by warm air to a moisture level of 4 %, automatically assorted according to colours, controlled once again and packed for sale into bags or tins. As the nuts are mainly needed during the festive season at the end of year and as the yields vary much from year to year, some of the nuts are deep frozen at –15° C. In this way the kernels can be stored up to 2 years without loss of quality.

Pecans in shell can be stored in the same manner for a long period.

Pecan kernels are graded according to number per lb (1 lb = 454 g) The higher the count is per lb, the smaller the kernels are. The grading of the broken kernels depends on the sift through which they fit. The size is measured in inches (1 in. = 2,54 cm).