The pear as the apple belongs to the pipfruit.

The only moderate high pear tree is covered with white blossoms during April. The anthers are very often red coloured. The epigynous ovary develops into a capsule fruit which has the characteristic shape of a pear.
Pears belong to the oldest cultivated fruit trees which have the origin in the Near East (Caucasus, Transcaucasia and Anatolia). As they were much liked by the Romans, they came to their colonies in Central Europe. The pear became a speciality in France during the 15th century. The so called ‚Sun King, Louis XIV, loved this fruit very much, so that the French growers looked after this pear to a great extent. 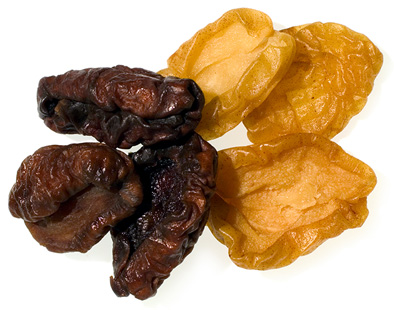 The fruit can be offered all year round by imports from overseas. European fruit is mainly on the market from August − October, overseas products from February − July.
There are more than 1,500 varieties of pears, but from these only abt. 10 are traded.
The most famous are Alexander Lucas, Clapps Liebling, Conference, Gellert, Gute Luise and Williams Christ. They differ mainly in shape, colour, texture of the fruit flesh and time of harvest. Williams Christ is the most suitable variety for drying. Dried pears are used to a certain extent by the baking− and confectionary industry e.g. for fruit bread and also for chocolate coating. Dried pears are also liked as a health snack, for adding to cereals (Müsli) and stewed for desserts.

In the orchards the trees are grown in rows at a distance of abt. 5 m. They will reach a height oft abt. 3 − 4 m. After 3 − 4 years the trees have the 1st yield, but will only reach full bearing capacity during the 8th year. After the age of 50 years, the yield drops off so that clearing is necessary. An average tree bears abt. 80 kilos annually. 7 kilos of fresh pears are needed to get 1 kilo dried fruit.

The pears are picked by hand, the same as the apples. The farmers walk through the plantations and take off the fruit having reached the required ripeness. They are sent in baskets to the factory.

It is not easy to determine the right time for picking. Is the pear too ripe and therefore very soft, it can be squashed by other fruit which is by placed on top. If the pear is not sufficiently ripe and too green, it is unsuitable for processing. Just by looking at the fruit the experienced farmer knows if it is ripe enough. A more reliable method is the measuring of ‚Brix‘ = content of fruit sugar.

The ripe pears are harvested in the southern hemisphere during January and in the northern one during August.

The freshly harvested pears are delivered from the orchards directly to the refrigerated warehouse, where the temperature is just below O° C. This assures that all pears will be at the same stage of ripeness during further processing.

After the pears are again warmed, the ripening process will continue during additional 3 − 4 days Then they are manually prepared for drying. The pears are cut in halves, the pips, stem and the fruit end at the bottom of the pear are removed. In comparison to the apples, which are peeled before sulphuring, the pears keep the skin and are sent after the manual manipulation directly into the sulphuring chamber for 24 hours.

The sulphuring is mainly done to lighten the colour of the flesh. The sulphur turns it to a yellow − orange colour, without sulphur the pears would be dark brown.
A sulphur content of only max 600 ppm is permitted in Europe. This is very low and it is difficult to get a nice light coloured pear without exceeding this limit.
After sulphuring the pears are dried in the sun. The process also needs a lot of sensibility.
In case the pears get too much sun, the edges get burnt. The drying takes 4-5 days on wooden trays, which can be moved into the shade, if necessary. The remaining moisture content after drying is abt. 18%. The pears are seldom dried in tunnels, as is done with the prunes, because the pears become too dark when this procedure is applied.
After drying the pears are assorted to size and checked with regard to defects.
One differs between small, medium and large. The smalls are not so much in demand, because they are very often unripe. The mediums are used for dried fruit mixtures. Large pears are mainly traded by themselves.

Afterwards the pears are washed in clear water and placed in a tunnel drier. At this stage the drying does not effect the colour any more, but reduces the sulphur level by 300 ppm.
After a last quality control the pears are packed into cartons of 10 kg or 12.5 kg net.

Pears are, similiar to the apple, very nutrious. The sweet taste is resulting from the moderate low content of fruit acids. Apart from the mineral potassium the pears contain a lot of vitamin B2 and folic acid.

This procedure varies a little bit in the different countries of origin, but in general it is the same. Everywhere one distinguishes between choice and standard quality which are also assorted according to size.

The below grading is similar to the kind practiced in Argentine, as in Argentine the highest quality pears are produced at most favourable prices.

Choice pears‘ are the better quality. They are fairly homogenous in colour, the fruit is nearly flawless. ‚Standard quality‘ is assorted out of the choice pears. Therefore the fruit is unhomogenous, light- and dark coloured with a bigger percentage of fruit with defects / flaws.

Defects can mean gnawing by maggots, spots or pieces of pears.
Argentine also has ‚industrial quality‘which is only suitable for jam or similar products.

In the past domestic pears were dried with skin and stem − in Germany the so called: Hutzeln, which had a dark, limp look and strong aromatic taste.