The Brazil nut originating from Brasil is one of the few fruit which nearly come only from wild growing trees and not from commercial plantations.

Wild Brazil nut trees thrive at the banks of the southern and northern influx of the Amazonas in the Brazilian provinces Acre, Amazonas and Para as well as in the adjoining countries Columbia and Bolivia. Very few trees also grow in Peru, Guayana and Venezuela, between 5° northern and 14° southern latitude. 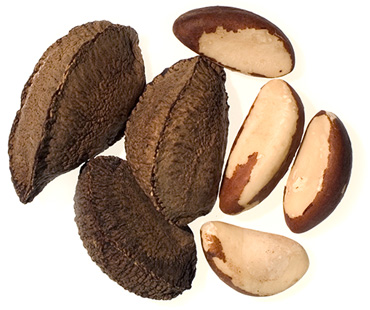 Brazil nut plantations are around Manus and Belem, few also in Sri Lanka and Trinidad. Trees with fairly low trunks were cultivated by selection and engrafting. Per hectare 25 trees are planted. In Malaysia some trial plantations were started, but these proved already as unprofitable. The problem is that several decades pass before a new planted tree has an annual commercial yield of several hundred fruit. Therefore the production of these plantations is unsignificant. Brazil nuts are in the botanical sense no nuts, but capsule fruit.

Brazil nuts are in the botanical sense no nuts, but capsule fruit.

For the first time the Brazil nut came to Europe in 1633. Since then it developed to a classic nut, available worldwide. It is a South American speciality, from which only 40,000 − 50,000 tons are annually exported, because the biggest portion of the total production is consumed locally.

The Brazil nut trees always grow sporadically in the tropical forests and most of the time their 30 − 60 m high umbrella shaped crowns are surmounting all others. The leaves are dark green, leathery and measure 25-30 x 10-15 cm. The trunks are like pillars with a smooth surface. The nicely grained wood is resistant to vermin. The yellow-cremy coloured blossoms develop on the influorescences pointing upwards and consist of two sepals. The 4 corn leaves sit on a stamen´s tube covering the blossom like a helmet.

The ball to oval shaped fruit, so called lid capsules, which are also named ‚pods“, have a diameter of 10 − 15 cm. These pods weigh between 0,8 − 2 kg. Extremely big pods can have a diameter of 20 cm and can reach a weight of up to 3 kg.

This fruit is similar to a coconut and has a very hard abt. 5 mm thick shell covered by loose dried up tissues. At the end of the shell is a kind of plug, which is the end of the inner stem (so called placenta), forming a lid. When ripening the stem is pulled inside so that an opening of 1 cm in diameter is the result.

Fixed to the placenta and in the lid capsule are 10 − 20 three square edged seeds, in a few cases up to 40, in shape and size of an orange’s segment. The seeds are protected by a hard shell including finally the kernel covered by a dark brown skin.

The Brazil nut needs an equitorial-tropical climate at annual average temperature of 25° − 28° C allowing only slight variations. The rainfalls must be nearly evenly spread during the whole year and must amount to 1,700 − 2,700 mm. In some growing areas a short dry period of 1 − 2 months occurs. The best yields are produced by trees growing on deep, damp alluvial soil − close to running water.

The Brazil nut trees bloom during the biggest part of the year, main blossom time is December. The nuts mature very slowly within 14 − 18 months. The collection of the ball shaped fruit capsules, which dropped off the trees, starts in November and lasts until May.

In the province Acre and its geographic extension to Bolivia the nuts ripen especially early, so that the main time harvest time is from January − March.

New trees grow from seeds but in order to have them released their shells must rot in the soil beforehand. This is a very slow process. Important is therefore the assistance of squirrel like mammals, which gnaw at the fruit capsules and bury some of the seeds into the ground for later use. These are mostly forgotten, rot and then new trees can develop.

The Brazil nut trees carry for the first time fruit at the age of 10 years. When the tree is 80 − 100 years old it is fully matured and supplies annually 600 fruit capsules −equivalent to 500 − 800 kg nuts.
The nuts are collected by so called „Castanheiros” at locactions which are a 2 days march away from the banks of rivers flowing into the Amazonas. When it is very windy harvesting is impossible as the many dropping heavy fruit capsules make the collection too dangerous. In order to make use of the time the shells of the already collected nuts in the forest’s interim station are opened by axts and machetes. It is more gently to open the fruit capsules by a circular saw. The seeds protected by the shells are transported in big nets to the collection places at the banks of the river and are spread out for a first drying in the sun. From there they are transported by ships to Manaus or to Belem. Depending on the location from where the nuts are shipped such transports can last between some days up to three weeks.

Before the Brazil nuts can be processed, they must be stored in dry premises for several weeks at a temperature of 27° − 33° C. The stocks must be shifted regularly so that the shells remain dry and will not turn mouldy.
Later on the Brazil nuts are assorted to size by means of shaking slides equipped with perforated sheets having holes of various diameters. After that a first manual assortment eliminates the damaged and discoloured nuts. Empty (unfilled shells) swimming in a waterbath at the top are eliminated, while the sound nuts drop to the bottom.
The following process warms the nuts gently in a slowly rotating drying oven heated by wood to a temperature of 43° C, slowly increasing to 60° − 65° C. In the end the nuts have a moisture content of only 10 − 12%.
In order to avoid a quick contamination by mould fungus, it is now common practice to dry the nuts before first storage more and more to a humidity level of only 10%.
Until further processing the Brazil nuts are kept in ventilated silos.
Abt. 50% of the nuts are cracked to get kernels, while the other 50% are sold in shell.
Normally the processing plants which dry and assort the nuts also crack the shells.
The nuts are soaked in water for 24 hours and are afterwards treated with steam.

In so called „cracking chambers“ hundreds of female workers break the shells by simple lever devices and remove the very hard fragments of shell very carefully from the kernel. In this way a person produces daily abt. 20 − 30 kg of whole kernels.
These kernels are assorted according to size and are manually selected. The kernels suitable for export are packed into plastic bags or into tin cans.
The nuts with defects are pressed into oil for human consumption and for use by the pharmaceutical and cosmetic industry for production of soap and shampoo.

The grading of the Brazil nuts in shell and the Brazil nut kernels is based on the number of nuts per lb (454 g). Therefore the higher the number per lb, the smaller the nuts or kernels are.

Grading of nuts in shell:

Besides whole kernels there are also: