The vine was discovered by the Semites at the southern boarder of the Caspian Sea approx. 400 B.C. The vines entwined high around the trees of the forests. The Semites did not only like the sweet juice of the grapes, but also developed the destillation of alcohol. They called the fermented juice Yain or Wain. They passed the vine, their knowledge of cultivation, production of wine amongst other things to the Phoenicians, who passed it on to the Greek and later on to the Spanish people as well. The Romans obtained the vine from the Greek people and passed it on to Galicia and Germania. Today grapes thrive in all countries of the world which have a so called „wine-climate”. But Europe is the world’s true vineyard, as two thirds of the sultanas’ crop come from here. The largest portion of course is for the wine production. A non irrelevant quantity is dried and needed for processing sultanas and raisins. These are mainly seedless. 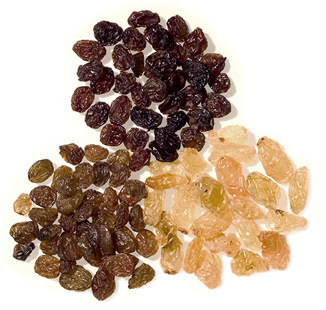 Dried grapes can be divided into three sub−categories. If the dried grapes contain seeds, they are called „raisins”, if they are seedless then one speaks of „sultanas”.

„Currants” − categorized by themselves − are also dried grapes, but from a very special vine. Currants are seedless, but they are much smaller than raisins and sultanas. The term „dried wineberries” originally was only used concerning the customs tarifs and was a combination for raisins and sultanas. It was mainly used by the health food section to give the „Californian Thompson seedless berries” a name. In fact this fruit are sultanas. For many decades dried wineberries with seeds, meaning raisins, have not been sold in Germany.

As can easily be seen from the paragraph „grading” each growing area produces many different varieties. The difference is often just another vine, whereby the „Thompson Seedless” is the best known. Apart from the variety, the treatment before and after drying plays an important part in the additional categorization. World’s production of sultanas and raisins is presently at 800.000 tons increasing annually by 2%. About half is used for bakery products, breakfast cereals, fruit bars or e.g. just by themselves as a snack. USA is top producer with an annual production of abt. 350,000 tons of sultanas. Turkey follows with 250,000 tons and then Iran with 60,000 tons, Australia with 50,000 − 70,000 tons, Greece with 50,000 tons − combined of currants and sultanas. Then come Chile, South Africa and Afghanistan.

Crop’s sizes depend very much on the weather. Above figures can vary by abt. 40% from year to year. The sultanas are used by the baking and confectionary industry. They are in dried fruit mixtures, taken as a healthy snack, as ingredients for cereals, salads and desserts and also for everyday cooking and baking.

The seedless variety ″Thompson Seedless″, named after an English grower, represents approx. 95% of California’s yield. Californian raisins grow exclusively in San Joaquin − Valley located abt. 112 km around Fresco. On 108,000 hectares California produces 98% of the raisins needed for USA’s local market as well as a third of the global demand. In nearly all other countries the so−called ″Sultana″ is cultivated. It is said to have taken more than hundred years before the growers reached their goal of a seedless grape. In honor of the Sultan at that time, this new variety was named „sultana grape”. Nearly 500 years ago the ″currants″ were successfully cultivated on the islands Kephalonia and Zante, in the west of the Peleponnese. Currants are today also grown in South Africa, Australia and in California. Important for correct growth is the cutting of the vines during autumn and spring. More than for any other fruit the share of sunshine and rain during growth influences the taste of later berries.

In the northern hemisphere harvesting of sultanas and raisins is during September and October. The grapes are manually picked, the same as for the wine production. Then they are passed on for drying. This process is decisive for the look of the fruit. There are light− and dark coloured sultanas. The sultanas’ colour however has nothing to do with the colour of the fresh grapes. All sultanas, also the dark, originate from green grapes. Different colours result from varying drying methods.

In ancient times the grapes were simply spread out for drying in the sunshine. After 2 − 3 weeks the grapes were dry and had turned dark−brown to black in colour (this method is still used for currants and Californian sultanas).

The Greek discovered a new method halving drying time and enlightening the colour of the dried sultanas. Before drying the grapes were dipped into a solution of flavoured oil and potash resulting in the following.

The berries are covered by a layer of overlapping scales like roof tiles. The solution of olive oil and potash cause the scales to prop up. By this proceedure the drying time is 2 − 3 times quicker.

The quicker the grapes are dried, the less is the enzymatic effect leading to the unwanted dark discoloration of the sultanas. Besides the sultanas remain soft and keep the full flavour.

The fruit can additionally be treated with sulphur dioxyde to obtain an even lighter colour. The sultanas will turn golden−yellow.

Iran also has green sultanas. This untreated variety is dried in the shade, but the drying time is twice as long as in the sun, meaning up to 6 weeks. By drying in the shade the greenish colour is maintained.

The sultanas come from the farms in baskets or bags. Baskets are better as the sultanas are less exposed to pressure.

After the sultanas are assorted according to colour, they are loosened. The sultanas run through a machine to get rid of any lumps.

Now the tiny stems (capstems) must be separated from the sultanas. It is effected by a rotating drum having numerous tiny holes. By rotation the sultanas are pressed against the drum’s walls. Only the capstems can penetrate through the holes. A knife, fastened outside of the drum, cuts off the capstems. Afterwards the sultanas are dried by a fan and assorted to size by running over shaking sifts.

To avoid the sultanas sticking together and forming lumps, oil is added on a conveyor belt with many small nozzles spraying the oil over the fruit. The entire procedure can be repeated, if necessary 2 − 3 times.

Real true cleanliness however can only be ensured by an additional manual assortment. The last stones, stalks and capstems are eliminated on white glass tables. The female workers throw a handful of sultanas on the table and hearing immediately when a stone hits the glass. Afterwards this small quantity is checked for stalks and capstems, which can easily be traced on the white underground. Only after the manual sorting the sultanas are ready for packing into the cartons. Before the cartons are sealed, the contents are rechecked by passing through under a strong magnet. If against expectation any metallic impurities are detected e.g. a ring, a hairpin etc., an acoustic alarm is immediately activated and the production is stopped.

The subject of grading is intricate as nearly each country of origin has its own method. From the many different ones we only picked the most important ones. Nearly everywhere assortment is in 3 categories.
Size of berries
Colour / brightness of berries
Cleanliness of the finished product.

It is easy to ascertain the correct type of sultana when above categories are taken into consideration. The sultanas can be smallberried, dark and with many impurities or big berried, light and very clean.

Turkey’s assortment is the best according to above criteria.

Size of berries number per 100 g − depending on outcome of crop, sizes of berries are newly ascertained each season

In Greece the already mentioned three categories are mixed to a great extent. Size and colour are combined taken into consideration and cleanliness is not mentioned much. The Greek sultanas were at their peak during the 50ies and 60ies of last century and remained, in comparison to the Smyrna sultanas, on the same quality level.

The smaller sultanas assorted from above types are classified by placing the figure ‚2‘ in front.

In Australia the sultanas are only assorted colourwise. All berries are 5 -15 mm big. Exactly as in Greece cleanliness is not a big topic. It can be said, the quality improves when the sultanas are lighter in colour.

In California the colour is irrelevant, since all berries have the same dark, slightly bluish colour.
Cleanliness is locally very strictly supervised by the governmental DFA (Dried Fruit Association) and is therefore continuously the same good quality. For this reason in California assortment is only according to size.

The same applies to Chilean as to Californian sultanas coming from the same variety („Thompson Seedless“). It is dark to light bluish in colour. These sultanas are not as clean as the Californian ones. Chile have their own method of assorting to size.

South Africa has two varieties of sultanas, only assorted to size. The dark sun dried sultanas and the light coloured, so called „Orange River Sultanas“, dried in the shade on wires.

Iran has the most primitive assortment. Colour and cleanliness are not an official subject, although there are large differences between the qualities of the various suppliers. Distinguished is between normal− and smallberried sultanas.
On an average Iranian sultanas are slightly more sourish than those of other origins and the fruit flesh is a little firmer.